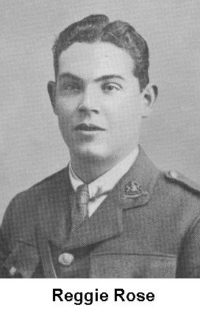 Reginald Rose or Reggie as he was called by his family, was born in Folkestone where his father Alfred carried out his trade as a Tailor. Alfred’s father was Edward T Rose a master tailor on The Strand. When his father died Alfred with his wife Louisa and their young family returned to Walmer where he decided to continue his late father’s trade moving to premises on Dover Road and Beach Street.

Reggie grew up in Walmer and attended Belmont House School. He enjoyed music and was in the choirs of both St Mary’s and St Saviours and became Drum Major in the Royal Marines Cadet Corps. His cousin, George, wrote in his diaries of how Reggie enjoyed listening to him playing the piano.

In March 1917 Reggie was given a commission with the Territorial Force Battalion, Manchester Regiment. Five months later he was shot dead whilst bravely leading his men in an attack in France. He was 22 years old. Reggie is buried in Coxyde Cemetery, Belgium.

I cannot imagine the pain and suffering his parents endured on being informed of his death.

We will remember them