Throughout the war, there were amendments to and reminders about the Aliens Restrictions Act. These were printed in the newspapers and were particularly aimed at the Belgians who perhaps, as ‘friendly aliens’, sometimes thought that the regulations really didn’t apply to them. These reminders came with the warnings that failure to comply could result in fines or imprisonment.
Then on August 15th 1915 everyone across Britain, no matter the nationality, aged between 15 and 65 and not already serving in the army or navy, had to register. Everyone was then issued with and had to carry a National Registration Certificate. 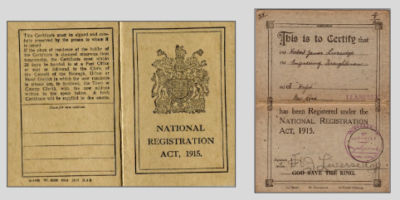 Life goes on wherever you are and so there were babies born, couples married and people sadly died.

Four marriages took place between November 1915 and November 1918 one of which was between Julius Verhelst and Mary de Preter. This took place on the 27 July 1915 and was followed by the baptism of a daughter, Mary Elizabeth the following May. And at that time they were living in London Road.  Julius can be found in the Belgian military records so he may well have already been in the army at this time. 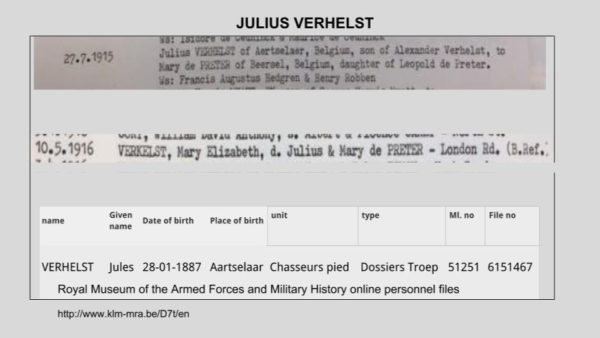 There were four burials recorded between March 1915 and November 1918.

Some Belgian Refugees of Deal and Walmer

On the list for unemployed in June 1915 a Leon Gilliot appears living in a property called Sandringham, on The Marina. He was an engineer by trade and was the Mayor of Aertselaer when the Germans invaded. He and his wife Laure arrived in Deal with their seven children and their eighth, Elizabeth, was born and baptised here in May 1916. Leon died in 1917 aged 54 and was buried in October in Hamilton Road Cemetery.  After the war his wife and children, like nearly all those refugees who came to safety in Britain, returned home to Belgium to rebuild their lives. Leon was later disinterred and taken home in 1919. 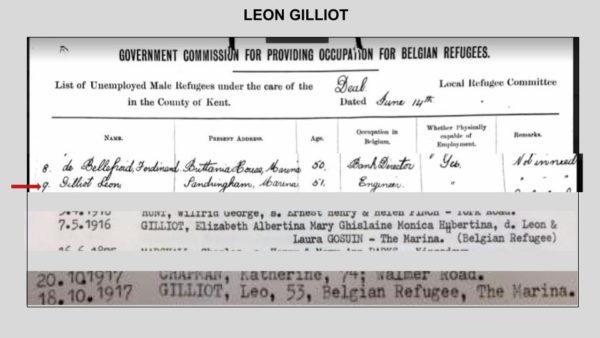 Leon Herssens appears on the list for the unemployed as a 29-year-old solicitor living in Deal at 97 Blenheim Road.  At some point, after July 1915 he joined the Belgian military. He is mentioned in the newspapers and frequently gave speeches and performances and is listed as vice president of both the Cercle Belge Comoedia, of which he was a founding member, and the manager of the Belgian club as well as being joint librarian there with his wife. 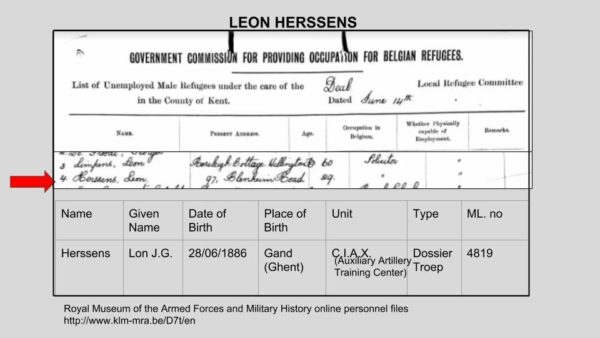 Leon’s wife was Jeanne Limpens and the niece of Father Limpens, curate of St. Thomas’, Deal. Her father Leon, mother Leonie, and 3 sisters were also here and lived in Wellington Road. They all moved to Rye in May 1916 and it is from there that they returned home to Alost after the war. Another uncle, Emile Limpens, was here with his wife and two daughters living in Blenheim Road. The daughters, Lucy and Marguerite, both joined the Red Cross Voluntary Aid Detachment in July 1917. They both went on to serve in a Military Hospital in Oxford before their return to Belgium sometime after December 1918. Sadly, their father Emile died in the home of his brother, Father Anthony Limpens, on the in November 1918. He, like Leon Gilliot, was buried in Hamilton Road cemetery and in 1919 disinterred and returned home.