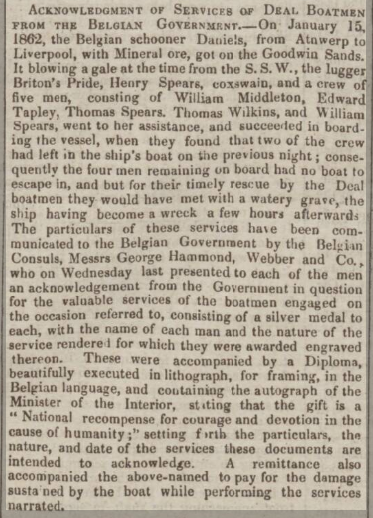 Like nearly all Deal Boatmen of the time the men sailing on Britons Pride took part in rescuing vessels in distress. Sometimes this brought financial rewards and a mention in the newspapers. When the men on Britons Pride took part in the rescue of a Belgium vessel named Daniel, they were also awarded medals.
The date of the rescue in this article though is incorrect as it actually happened two years earlier!

When vessels in need of assistance were spotted, it was the custom for any boat to be taken off the beach and crewed by those readily available. Any monies earned were then shared between the crew and a payment to the owner of the vessel, or vessels, was also made.
The amount given to the owners of the vessels could be a share and a half in total or a share and a half for the main vessel plus another half share for a second vessel. But there were apparently many rules and customs amongst the boatmen which led to disputes.

In 1861 William Spears, one of the owners of Britons Pride, and also Englands Glory, was in dispute with another boatman, named only as Files in the newspaper report, over the payment for the use of Britons Pride and the punt belonging to Englands Glory. Files took these vessels off the beach to render assistance to the ‘Ulrica’  who was in trouble on the Goodwins. This action brought ‘considerable compensation’ to Files and the crew who each received the sum of £11 10s. William Spears, as one of the owners of the ‘borrowed’ vessel, was then given £17 15s as his share and a half. He then asked for an extra half share for the punt plus 35 s for the lost anchor. These extra amounts were refused by Files, so William and the co-owners took Files to court.

Sadly for William, it was said in court that as there were “so many different rules amongst the boatmen…” it was difficult to see what was “….the custom in all cases…” and the loss of the anchor was accidental so this claim could not be enforced.

Board of Trade Enquiry

Deal Boatmen were always being accused of wrecking activities to enable them to claim salvage money. These fraudulent claims culminated in a  Board of Trade enquiry. One such enquiry involved Britons Pride and her crew.

In April 1867, William Spears, on behalf of Briton’s Pride, made a claim for services performed by the lugger for the American ship Olivia.

While cruising among the shipping in the Downs, the lugger’s crew observed the Olivia apparently in imminent danger of collision with another vessel. They offered assistance and were employed by the captain to help him out of the dangerous situation and in doing so the anchor and chain were slipped. Once the ship was in a safe place, they took the captain ashore to arrange with the agents for a new anchor and chain. For this service, the boatmen were awarded £420.

The Board of Trade became suspicious of this transaction and ordered an enquiry which found that the crew of the Briton’s Pride had first encountered the Olivia off the South Forelanf where William Middleton was put on board to pilot her into the Downs he then decided to anchor Olivia there. Under the strain of the wind and tide, Olivia’s anchor chain broke. Whether this happened due to Middleton’s poor handling of the ship, or a deliberately is not known.

George Baker, the North Sea pilot was then put on board to pilot the Olivia into The North Sea. Olivia’s captain claimed that he told George Baker that the “chain had parted”, upon which Baker replied, “make it slipped.”

It seemed that George Baker, William Middleton and William Spears wanted it to appear that Olivia had been in danger and the anchor had been ‘slipped’ so that they might claim for salvage services and for bringing out a new anchor and chain and bribed the Captain of the Olivia to enter this into the ship’s log to confirm it.

As a result of the Board of Trade’s enquiry, William Spears, William Middleton and George Baker were prosecuted,and each sentenced to six months with hard labour at Maidstone Gaol.

On 23 October 1878 Britons Pride was seriously damaged after being struck ‘Her Majesty’ a London tug while they were engaged in assisting the barque ‘Messel’ who had been in a collision with another vessel and was being towed by the London tug.

Built similarly to a lugger but 12-16ft long.

anchor and chain were slipped

To slip an anchor means that the anchor ( and chain ) are released and abandoned on the sea bed.