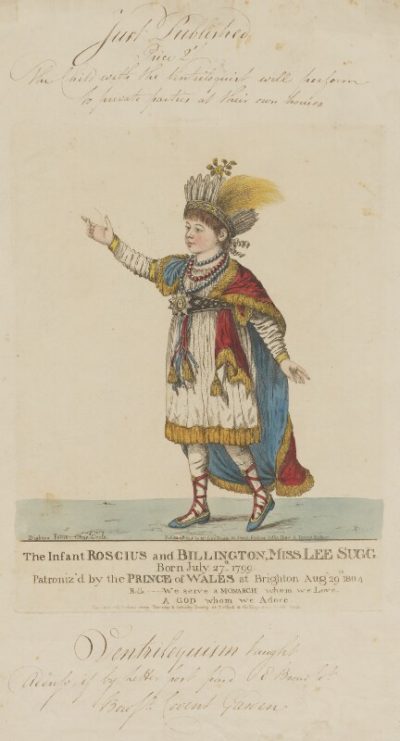 We don’t know if Catherine was actually born in Deal but she was baptised here. There was an elder sister, of the same name, who was baptised in Great Yarmouth in July 1798, although we can’t find any burial record, she must have died before her first birthday and before her sister and namesake was born.

Their parents were Christopher Lee Sugg and Catherine Juliana Roberts. They married in Swansea in 1797 and from there they went on the road. Christopher was a ‘self-promoting’ performer who was best known as a ventriloquist. He had a talent for throwing his voice and making it seem as if it was coming from anywhere apart from himself!
As they travelled, their family grew. Twins Elizabeth and Mary were born in East Retford, Nottinghamshire in 1800, they both died within a year of each other in Bagillt near Holywell in Wales. Then in 1801, the Hampshire Chronicle reported the premature birth of a second set of twins.

Catherine seemed to recover quickly as by 1802 another daughter, Elizabeth, was born in Swansea. Christopher John was born seven years later in 1809. He wasn’t to reach his second birthday; he died in Chester aged fifteen months. Another large gap followed before Harriet their last child was born in 1819, she too died in infancy in London in 1821. As not all the baptism, marriage and burials of the Sugg family can be found in the online parish records we have had to rely on the newspapers to help piece together this family. 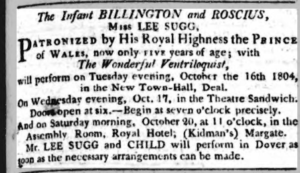 He then shamelessly used his young daughter’s talents and the fact that she had performed in front of the Prince of Wales in Brighton in August 1804. According to the Bath Chronicle dated April 5, 1804  “…, this beautiful child was, we understand, introduced to her Majesty on the 24th December last…”  if true, maybe this is how she came to perform in front of the Prince.

In 1817 Christopher even petitioned to perform before the Queen herself “to sing his additional verses to the National Anthem, which prays for the Queen.”

It was at Deal’s new Town Hall, possibly for the first time, that Catherine was to appear as ‘The Infant Roscius and Billington, she was just five years old! A playbill was produced and published by her father and advertised as for sale at Five Shillings from various outlets including from a Mr. Atkinson’s in Deal.

The V&A tells us that the poster (see the top of page) depicts Catherine in the character of Rolla in Sheridan’s play Pizarro She is billed as ‘The Infant Roscius and Billington’. Roscius was a celebrated Roman actor popularly portrayed in the 18th and 19th centuries. A child star Master William Betty (1791-1874), who was acting at the same time as Miss Sugg, was billed as The Young Roscius. The Billington was the actress and singer Elizabeth Billington (1765 or 1768 – 1818).

By 1808 her only surviving sibling Elizabeth had also joined her on stage where they both supported their father’s act by performing short plays and singing songs and duets.

It seems that by 1816 Catherine was performing in her own right with the Norfolk & Suffolk Company of Comedians. Then in 1818, it was announced that she had “been engaged to go to America.” It is here that she met James Henry Hackett; they married November 1819. He had been studying law, but this was soon abandoned and he set up a grocery business in Utica, New York. It was here, in February 1821, Catherine had her only child, a son named John Keteltas Hackett. Following the failure of the grocery business, Catherine returned to the stage where she, once more, found success. 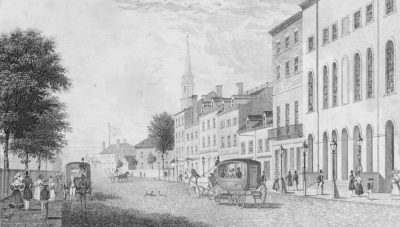 Her sister, Elizabeth, had married Frederick Sharp in Woodbridge in 1821, she too had been with the Norfolk & Suffolk Company of Comedians and had also emigrated to America. As there are no records it is unclear when, and if, Elizabeth’s husband went with her or indeed when Catherine herself actually arrived. Both sisters did perform together though, mainly at the Park Theatre in New York. 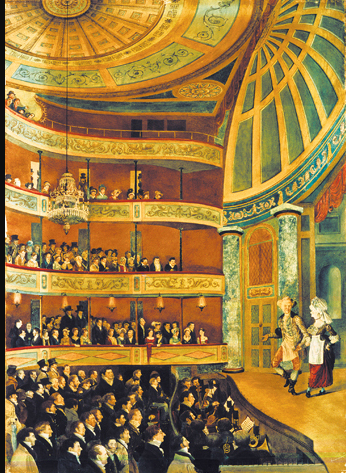 One night at her own  Benefit Performance Catherine invited her husband to join her on stage where he was to show that he was a born mimic by impersonating noteworthy actors of the day, this resulted in an offer from one of them to act in William Shakespeare’s ‘A Comedy of Errors.’

Although he had only been acting a few months James travelled to England appearing at Covent Garden in April 1827. He returned to America where his career carried on in an upwards trajectory, particularly in Shakespearean roles. He apparently made Sir John Falstaff ‘his own’ and after communicating with Abraham Lincoln they eventually met at the White House in December 1863. James died on the 28 December 1871.

As for Catherine’s father, news must have reached them of his death in 1831. It seems that since the departure of both his daughters from the act his popularity amongst theatre-goers began to wane. The Morning Post, in 1826, states that Christopher Lee Sugg was “…living on hard times at his lodgings at 11 North Street, Manchester Square.” after that, there are several adverts posted by him offering private audiences of entertainment. Friends rallied around him and in 1829 they produced and printed a full-length likeness of him to be sold in his benefit. He continued to perform and so it was that he found himself in Newport where he fell ill. Still living hand to mouth at the time of his death he had no money put aside for his burial so some of his brother Freemasons, who had supported him through his illness, paid for his funeral.

Unfortunately, we have not found what happened to his wife Catherine Juliana though she may have died in Cornwall in 1827.

Catherine died on 9 December 1845, aged forty-seven years and is buried in Prospect Cemetery, Queens County, New York. She, at least, was to share some of her husband’s fame in the profession that she was born to. Despite one article describing her as “…the real attraction..”  of the two she is sadly only remembered as The Infant Roscius and Billington, the daughter of Christopher Lee Sugg Ventriloquist, or simply the wife of James Henry Hackett actor.