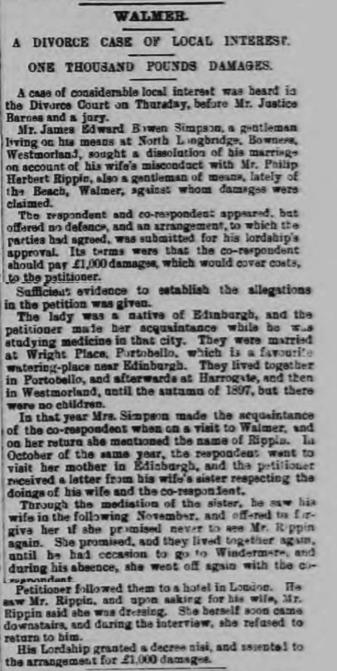 Daniel Rippin came from a farming family who worked the land in Leicestershire, Lincolnshire and Nottingham. Daniel married late in life into the Poole farming family of Lincolnshire. There were numerous marriages between Rippin and Poole families.

Why Daniel decided, sometime during the 1880s, to move to a prestigious house on The Beach in Walmer, I have no idea. It may have been for health reasons or maybe his wife had connections with the area.

His eldest son Philip was named in a divorce scandal but his other children seem to have married well and had the opportunity to travel. Cyril and his South African wife went to Canada where they raised their 4 children and Cyril became involved in fruit farming. His sister Mary appears to have spent some time visiting her brother in British Columbia.

An interesting visitor or, as the 1891 census says, lodger, was Lady Ellen Constance Kilmorey and her husband Lord Francis Charles.  Lady Ellen was apparently a renowned beauty and as Edward VII was a frequent visitor to the Kilmorey estates at Mourne Park, County Down it is thought that she had an affair with him. In 1910 she was embroiled in a scandal, caused as she was bequeathed the ‘Teck Emeralds’ and other jewels, by her lover, Prince Francis of Teck, brother of Queen Mary.

Why the Kilmorey’s were staying with Daniel Rippin or even if there is a connection at all, we don’t know.

Newspaper image © The British Library Board. All rights reserved.
With thanks to The British Newspaper Archive (www.britishnewspaperarchive.co.uk).