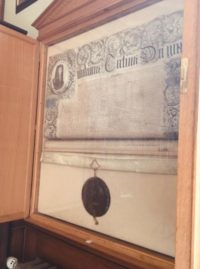 The Charter in it’s case in Deal Town Hall

We perhaps have two men to thank for our knowledge of how Deal gained it’s Charter of Incorporation. Firstly one of the men who was actually there, the Slopseller Thomas Powell, who recorded in his own words the “…particulars and proceedings…” that led to Deal gaining it’s Charter and Stephen Pritchard who much later, in 1864,  printed those words  “…as narrated by Thomas Powell… ”  in his book, the History of Deal.

A merchant who sold cheap ready-made clothing or rough working dress. These were known as slops. These would include butchers’ aprons or articles of clothing and bedding issued or sold to sailors.

On Saturday 13 December 1698 a parish meeting was held. Pritchard’s quote says “The Parish met at St. Leonard’s Church in Vestry pursuant to a notice given the previous Sunday”

A Vestry is a room or building attached to a church used as an office and for changing into ceremonial vestments. A Vestry meeting was a meeting of parishioners, originally in a vestry, for the conduct of parochial business.

The meeting, being a large one, was probably held in the church itself but wherever it was held we are told that it was unanimously agreed that Deal should become a “Corporate and Market Town” and that as “we might gain ourselves, friends”  it was agreed that Sir Basil Dixwell, MP for Dover and one time Lieutenant of Dover Castle,  should be approached. Sir Basil had already helped the Vestry with a lawsuit and, as the Vestry was already indebted to him, they decided first to clear that debt by paying him from the Parish Cess A “suitable person” was then to be sent to acquaint him with their plans and ask for his support, which he gladly gave.

A vote was then taken to elect twenty men. Known as the ‘Managers’ they formed the committee that was then to plan and go about the business of gaining the Charter.

The meeting, we are told, was then closed but later that same night the Committee of Managers met at Foster’s Coffee House in Deal to decide on how they should proceed and rules were then drawn up. Where this Coffee House was is currently not known but it was used by the managers to hold their planning meetings.
It stated at this meeting that the parishioners had already subscribed £500 for the purpose of gaining the town it’s Charter. This was a vast sum of money and approximately £53,491.65 today.

Rules were decided upon and, in brief, they were:

These rules were then signed by the twenty Managers.  Henry Bowles, Captain Thomas Gardner and Thomas Powell were chosen as the men who should go to London to negotiate and carry out any measures that would enable the furtherment of their cause. Valentine Bowles and Samuel Fasham were to become Treasurers, Samuel Harris was to write to Mr. Gorrard, Secretary of the Sick and Wounded Society that, during this time, were part of the Navy Victualling Board, in London to ask for his assistance and giving him the reasons for wanting to become an Incorporated Market Town telling him that his services would be rewarded.

Also known as the Sick and Hurt Board, though fully titled The Commissioners for taking Care of Sick and Wounded Seamen and for the Care and Treatment of Prisoners of War. They were responsible for medical services in the Royal Navy and were a subsidiary body to the Navy Board, supplying surgeons to naval ships, providing them with medicines and equipment, and running shore and ship hospitals; they were also responsible for prisoners of war.

It was decided that each of the Managers should put in writing the reasons that he considered caused hardship to the parishioners of Deal because of the dependency upon Sandwich.

This meeting started with the order that only one person was to speak at once. Then it was decided that, by the next Monday, a subscription list was to be made by John Dane, Joseph Nicholls and Thomas Powell. Joseph Lane was then nominated as Secretary. Also by the next Monday, it was decided that Thomas Powell, using the twenty managers considerations for separating from Sandwich,  was to have prepared the conclusive reasons why Deal “ought to be no longer dependent on Sandwich”

It was on Monday 29 December 1698, that it was agreed to publish their 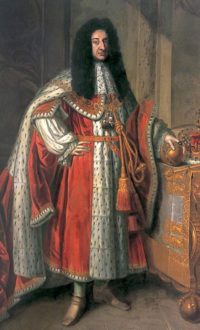 As we now know all the efforts of the twenty Managers,  were successfully rewarded and on the 13 October 1699 His Majesty King William 111 granted Deal its Charter of Incorporation and fixed the Great Seal of State to it.

In doing so it gave the town the freedom and powers to buy and sell land, tenements goods and chattels to annually on the 1st of  August elect a Mayor and other offices, to enrol freemen, to provide a gaol or prison, to hold a market on every Tuesday and Saturday and a cattle and goods fair, held over two days, twice a year, to hold  Pie-powder Courts and to make laws, bye-laws with penalties as and when necessary

Joshua Coppin was named in the Charter as the towns first Mayor and it is recorded that he was insistent, and quite rightly so, that his name was to be spelt correctly as Coppin and not Coppen.

Cess (parish cess)– A tax for the Relief of the Poor 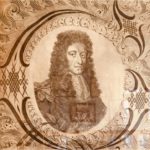 Images with thanks to Deal Town Hall