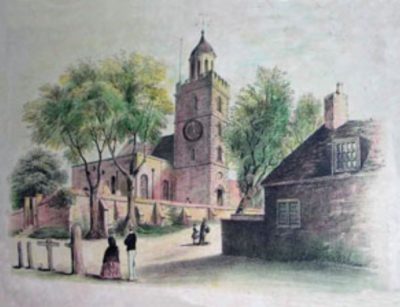 Deal was once a mainly agricultural village centered around the parish church of St Leonard’s. Therefore it must be safe to say that there was a reliable and easily accessible water source nearby.
However, this could not be said for the rapidly growing ‘New Town of Deale’ on the foreshore. Here the people obviously dug wells but, being so near to the sea, the water was often brackish. To supplement this, rainwater was also collected in tanks or cisterns that were made of whatever was available to them.
With the growth of the town, a reliable water source was needed not just to supply the people residing there, but also the merchant and naval shipping anchored in the Downs as well as the Naval Yard.
Ships were often supplied with barrels of water that were carried out to them by smaller vessels. Barrels were also tied together and the floating barrels were then towed out to the awaiting ship.

A Grant of Letters Patent

By 1688 two men had, they thought, come up with a solution and on 21 July that year,  Edward Burdett and William Ryder, were granted Letters patent from James II to enable them to bring freshwater into Deal and to supply the shipping in the Downs.

The Patent itself tells us that the water brought from Deal to His Majesty’s Ships was often brackish and unfit to drink and that Burdett was willing “at his own charge to bring freshwater from a spring …to the town…” The King gave his license” for that purpose and “…to erect a conduit head and wharf upon the beach for the …convenience of the ships and vessels…”  It also says that Edward Burdett requested that William Ryder Esq. Should have “full and sole license liberty and authority…” to carry out this proposal. The right to dig up at “…suitable times the highways and streets…” of Deal to lay the pipes and to repair these as and when necessary was also given.

Now being family historians our natural instinct is to ‘hatch, match and dispatch’ these men or in this case, at the very least, to find some connection with Deal or with shipping. So who are these two men?

Frustratingly, though not unsurprisingly given the dates we are dealing with here, Edward Burdett has somewhat eluded us. There is a suggestion that he spent time in The Fleet Prison as  “…disaffected to the government…” but we have not been able to confirm this. At The National Archives there are quite a few documents pertaining to an Edward Burdett of Grays Inn, however nothing seems to connect this Edward to William Ryder, or to shipping. However, there was a William Burdett marrying a Jane Robinson in Deal in 1682 and Jane’s death is also recorded there the following year. But is this William Burdett related to Edward?

It is possible that William Ryder could be the son of a London merchant named Captain William Ryder whose commercial contacts included  his sons Thomas and William. Thomas, who married a Philidelphia Barnham and then purchased, from her father, land on Romney Marsh. So a tenuous link with Kent at least.

Captain William Ryder, the father, has left a lot of information about himself. He was a successful mariner and involved in the Levant trade, trading in a wide range of commodities including sugar, munitions and naval supplies. He was knighted by Charles 11 in 1661, though throughout his life he styled himself simply as Captain Ryder. He was known to Samuel Pepys and is mentioned in his diary. These two men would have known of the growth of the new town of Deal, and it’s growing importance to the shipping in the Downs and of the Naval Yard. Captain Ryder would surely have discussed these things with his son.

As for the younger William, there is a definite baptism on 1 November 1649 in St. Andrew Undershaft, City of London and a marriage for him to Ann Pye, a wealthy widow, in Aldersgate’s St. Botolph’s Church on 22 November 1705 but no conclusive death or burial record can be found for him. In 1730 he is listed as a trustee in Ann’s Will for lands that she was leaving to her younger children, so we  know at the very least  he was alive then.

Although there is nothing definite to prove this William Ryder, and the William Ryder who gained the Letters Patent, are one and the same man. The available documents do seem to suggest that they are. There is, for example, in 1684 a William Ryder who was a Purveyor and Granitor to the stables of King James II. Also listed is an A. Rowe. It surely can’t be a coincidence that in 1700 William Ryder borrowed £1,500 from an Anthony Rowe for his freshwater scheme at Deal.

a published written order issued by a monarch or head of state,  granting a person or a corpration, particular rights and priveleges, titles, offices and also the monopoly rights in an invention.

Traded in many types of commodities including rum and spices, cottons and woollens,  metals such as tin and pewter and much more. They also set up trading centers, known as factories, in already-established commercial centers, such as the Levant Factory in Aleppo.