Although Warner had lost out, he was not to be put off, especially as he seems to have made a favourable impression on the newly formed Corporation of Deal.
The town had finally gained independence from Sandwich when it recieved its Charter of Incorporation on 13 October 1699. Therefore, choosing to side with Warner and to write three letters in his support, must have been amongst the first important actions taken on behalf of the town by the newly elected Mayor and Jurats.
John Mumbray, the then Deputy Mayor of Deal, sent the first letter of Petition in support of Warner’s Bill dated 24 March 1699/1700.
It says that, in their opinion, the “… water is very good and wholesome and sufficient for the town and also for supplying his Majesty’s ships riding in the Downes…” it ends “Your Petitioners Humbly pray that the same may pass into a Law” and is then signed by him and thirty-nine others.

After Ryder’s Bill was examined by the Committee and the Petition from Deal was read to them Robert Davers reported back to the Commons. However at this stage they decided not to pass the Bill.
He must have been devastated. As we will see later, as he, like Warner, had a lot of money tied up in the scheme, in fact a lot more. Providing freshwater had the potential to be a lucrative business and both men, for the present at least, had lost out on any possible income deriving from their schemes.

A year later on 4 March 1700/01  Ryder tried again, this time he was successful and the Bill was passed to the Lords for it’s reading in that House.
Warner was still not willing to give in and on 27 March a Petition from him was presented to the House of Commons. In which he states that his “…Undertaking which may effectually be completed within two months time…” but now as Ryder’s Bill was again in the way Warner now asked to be heard in Counsel by the Committee. This was agreed to be held on Monday, 19 May. We know that this was postponed as a letter from Warner asking for a postponement survives in which he says that his engineer, and principal witness, Thomas Tuttell “… and some other material witnesses from Deal cannot be in Town so soon…” 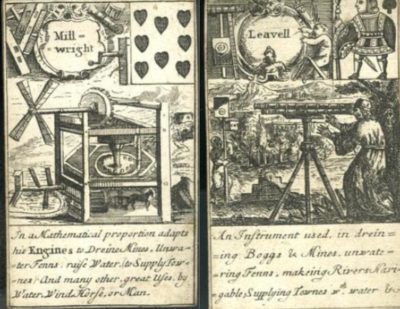 Warner calls Thomas Tuttell an engineer. We can not be certain but as he says in his request that Tuttell was “…out of Town, for services of his Majesty and the publick…” we feel that he could be the Mathematical Instrument Maker and Hydrographer who was appointed to the King in 1700 who made a whole range of instruments for measuring, gauging and surveying for use both on land and on water.

This Thomas Tuttell had, in around 1700,  sets of playing cards made and engraved with his ‘instruments’ and interestingly for us one of his instruments he called a ‘Leavall’ which he advertises as  “An Instrument used, in dreining Boggs & Mines, unwatering Fenns, making Rivers Navigable, Supplying Townes with water”   Another  advertised for Mill-Wrights says “In a Mathematical proportion adapts his Engine to Dreine Mines, Unwater Fenns, raise Water (to Supply Townes) and many other great uses by Water Wind, Horse or Man”

A Letter of Support

It is at this point that the Mayor and fifty-three other inhabitants of Deal send their second letter in support of Warner and Petitioning against Ryder’s Bill. This letter, dated 26 May 1701, says how Warner had over the past year offered and had begun to erect a “waterworks for supplying them with good water” and had made good progress in doing so. Ryder, however, they stated had “…not expended any money in erecting any waterworks for the service of this Corporation to our knowledge nor obliged to pay this Towne any rent for the Benefit of the same…” They go on to ask if they can be ‘heard’ by their Lordships in the House to speak in favour of Warner’s scheme.

A third letter, stating the same, was sent on the 22 May time to the Lord Warden of the Cinque Ports and the Admiral and Lord Lieutenant of Kent, the Earl Romney Henry Sidney. This letter was read in Committee on 30 May. The Journals of the House Lords state that “…The Mayor and Inhabitants of the Town of New Deale are to be heard by their Counsel, (as desired in their petition) …on Tuesday next at Eleven a Clock.”

This though only led to amendments being made to the wording in Ryders Bill, striking out the paragraph relating to the Letters Patent.  Ryder’s Bill became an ‘Act for furnishing the Town of New Deale with fresh Water’ and gained Royal assent on 12 June 1701.