In May 1709, William Ryder took out a Bill of Action against George Sorocold accusing him of overcharging him for the services he had provided and even those he had not. This litigation gives us an idea of the activities and efforts made by Ryder to bring about his ‘freshwater scheme.’

The Bill was taken out against Sorocold in response to his Bill against Ryder for “…one hundred and eighty pound for the preparing, building erecting and finishing the same. And also for the further sum of Three Hundred pounds for his labour and pains and moneys…”

Sorocolds’s Bill doesn’t survive but Ryder’s tells us that Sorocold made a visit to Deal, from London, with a Mr Ayres. Though who Mr Ayres is we have no idea. Ryder says that he paid for the visit in which the two men were “…to view the said Warners waterworks…”  at a cost of ten pounds “… besides two pounds five shillings and sixpence for Horse, meat and other expenses…” . On this visit Sorocold was also to report back to the House of Commons Committee but Ryder says this report was “…so lame and imperfect an account that your orator (Ryder) was obliged to send down  for and bring up  several persons from Deal  to give a full and satisfactory account…”

In June or July 1701 Ryder said that he went to Deal with Sorocold, who insisted on taking Mr Ayres, at a total expense of twenty pounds. Mr Ayres, Ryder seems to think, had come along “…to no purpose…” This visit was apparently to view and examine the “levell”, or marsh, through which the water was to be brought. It was on this visit that Ryder “…Did come to several agreements with many persons whom your orator (Ryder) employed there…”
These ‘persons’ were probably employed to do preparatory ground work and labouring.

An agreement had previously been made whereby Sorocold would offer advice  “…from time to time…only in and about the said works…”  Sorocold though was a busy man at this time with “…several other works at several places…” Not least the Great Waterworks at London Bridge where he was employed by Mr Richard Soames. So large was this undertaking that Soames’ company paid the rent on a large residence for Sorocold and his family to live in while he undertook the work.

During the visit to Deal, in 1701,  Sorocold told Ryder that he had not as much time to offer him, because of his work on Mr Soames’ Great Waterworks. He did however recommend a “… George Howett for the making and erecting an engine for the forcing and bringing up the water out of the levell near the said town of Deal in pipes into and through the said Town…”
Howett then is the builder of Ryder’s water engine. The two soon employed a Joseph Hollam and several other workmen to bore pipes and for brass and iron works. No mention is made as to where this work was carried out. The engine itself would have had to be transported, probably by sea, to Deal so maybe the pipes were shipped at the same time. 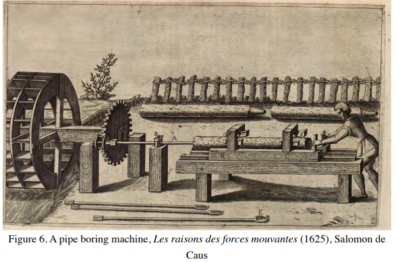 The engine and frame were built in Mr Soames’ yard at Whitehall. This, it was agreed, would enable Ryder to still gain advice from Sorocold without causing him “…trouble or obstructing any other of his affairs…”.

Then in October 1701, with the engine near completion, Ryder with Howett visited Deal to look for a “…proper place…” to erect it.  Imagine Ryder’s surprise to find Sorocold in Deal with a Mr Henry Beighton who had recently returned from viewing the waterworks at Versailles “…in order for the better carrying of the London Bridge Waterworks…”  This visit was, Ryder says, at his expense!

He goes on to claim that through Sorocold’s negligence he had “…suffered at least five hundred pounds damages by the laying of pipes in clay for want of driving longer pipes for supplying the said engine at the low water …”  Also that the parts for the works required for the “…Sea Service is still wanting and unfinished…”  Thus he said George Sorocold was overpaid for his help in assisting with the passing of the Act of Parliament, for his ‘fictitious’ attendance on juries, his journeys made that “…he well knows he never undertook…” and for the advice on erecting and finishing the engine.

Who was the actual victim here?  Sorocold himself was, it has to be said, no stranger to litigation.

Richard Soames, a London goldsmith, was the owner of the London Bridge Waterworks Company and had employed Sorocold to build his ‘engine’  However, in 1704, Soames was declared bankrupt and imprisoned.. As a result Sorocold’s salary was not paid and neither was the rent for the large family residence in Cecil Street. With the rent unpaid the Sorocold family were evicted.  The engineer was also sued for debts incurred by Soame for materials supplied to the bridge works.

Joseph Hollam is another elusive character we can find nothing to indicate who he was or where he came from.

George Howett could be the Millwright who died in Lambeth in 1719. In his he says that at the time of his death he was owed money by “…the Right Honourable the Lord Carteret and the  Right Honourable the Lord Tankerfield (?) and the proprietors of the fire engine of Newcastle…” Experiments with ‘Fire-Engines’ presumably steam engines were being made at Newcastle upon Tyne in the early 1700s.

In the same year, there is a bill of law taken out by  Elizabeth Cockayne the wife of James Cockayne against William Ryder and the sisters of Anthony Rowe for the £1,500 that Ryder had borrowed from Anthony Rowe for his waterworks scheme.
Interestingly there is a William Ryder and an A Rowe listed as ‘Purveyors and Granyors’ for James II stables in 1685 also listed as an  ‘Equery of the Hunting Stable’ was a James Cockcayne.
Ryder was no stranger to the claim courts. The National Archives hold the surviving copies of the court cases taken out by and against him. Some are joint claims with his wife Ann Pye some are against his sister-in- law the earliest is when Ryder contests his father’s will.