It is unclear when exactly Edmund was born or baptised. Most of the census records say he was born in Deal in 1803 however the first time a definite mention of Edmund is found is in his adult baptism at Deal’s Congregational Church in 1826. Interestingly his future wife was a Congregationalist so maybe it was she who introduced him to this church. This would have been the Old Congregational Church which was replaced by the current building now known as The Landmark Centre.

Edmund was a currier and leather seller by trade and it is probably through this trade that he met Ann Mummery nee Viney, who became his first wife. She was the widow of William King Mummery who she married in 1819 in Folkestone and then settled in Deal where William may already have had a business on Lower (High) Street. He is certainly listed as there on the 1821 Census.

The Mummery family seem to have been involved in the leather trades as tanners, curriers and leather sellers with businesses in Folkestone, Dover, Deal and Sandwich. 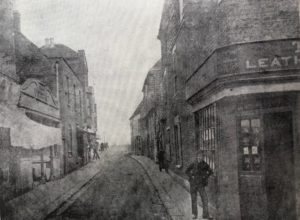 William King Mummery died in 1823 leaving Ann a widow with three young children. Following her husband’s death, she remained in Deal at the Lower Street property where she continued to run the leather selling business probably with the assistance of a manager who may have been a Mummery family member. It is not known if Edmund was working for them at this time but, in 1832 and he and Ann marry and he takes over the running of Currier & leather selling business. The property, owned by the Archbishop of Canterbury continued to be leased in Ann’s name and some of the Mummery family was situated on the corner of King & Lower (High) Street.

Edmund and Ann go on to have two children Thomas Viney, Viney being Ann’s maiden name, and Celia both of whom like Edmund were baptised in the Congregational Church in Deal.
Ann died in 1864 and was buried in Hamilton Road Cemetery. Two years later Edmund married widow Mary Jones in the District of Hackney.

1845 sees Edmund elected as Mayor of Deal for the first time. Though it seems not all were entirely happy with his election. 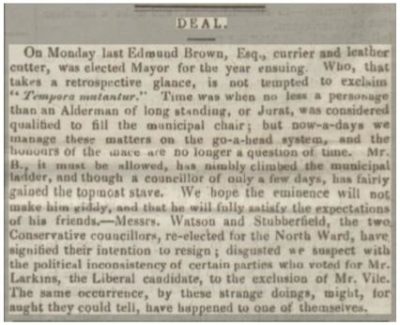 Edmund died in 1894 and is buried in Hamilton Road Cemetery 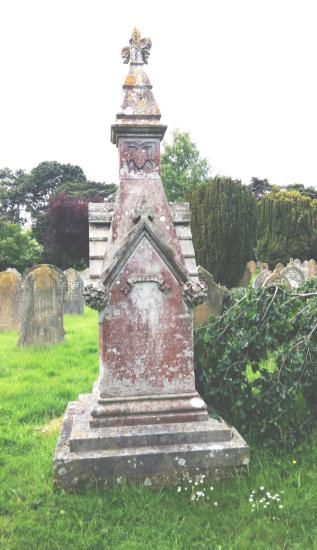 For many years Alderman and Councillor of Deal and for 68 years member and for 54 years Deacon of the Congregational Church there.

“Mark the perfect man and behold the upright for the end of that man is peace.” psalms xxxv11 v. 37