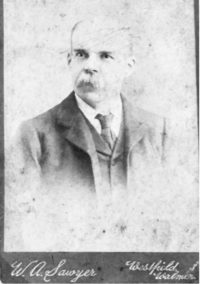 Edward Thomas Rose was the illegitimate son of Sarah Flower nee Rose. Illegitimacy seems to run in the family as Sarah was an illegitimate child too. Her mother married Edward Weston, a cordwainer when Sarah was 2 years old.

On the 1841 census, Edward Thomas is to be found with the surname Weston and living in Walmer with his stepfather, mother, grandmother and stepbrother William Weston.

By the time Edward marries in 1849, he is a tailor. He marries Sarah Cavell who is 8 months pregnant with their first child, Elizabeth. They go on to produce a family of 14 children.

The Roses begin their married life in Upper Walmer in a house/shop on the Dover Road from where Edward runs his business. In later years his son, Alfred, takes over this shop. The family soon make the move to 8 The Strand (now number 7 but always identifiable as they are positioned next to The Stag public house.) Edward leases this property from the Leith family.

Throughout his life, Edward served his community. He was very proactive in the building of St Saviour’s Church on The Strand in 1848 and the curate, at the time, David Bruce Payne, became a life-long friend. Edward was Churchwarden at St Saviours for many years until he had the position snatched away from him during a vestry meeting. News had recently reached Walmer of his son, Frederick, who had died in Dorchester prison, an alcoholic who received no medical care during his incarceration. I can only guess that Edward was no longer thought to be worthy of the post of Churchwarden.

In 1881 Edward became embroiled in the Sandwich election bribes scandal. He was called to give evidence and to defend his actions. His neighbour, the landlord of The Stag, was sent to prison for his part in this fiasco.

Edward Rose was a founder member of The Walmer Court of The Foresters, he was instrumental in setting up the Volunteer Corps in Walmer and was one of the first members of the Walmer Local Board (now known as the Parish Council). 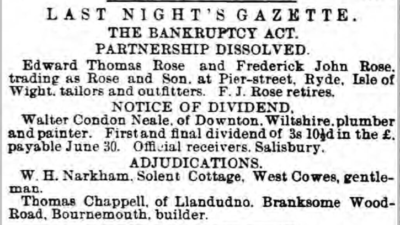 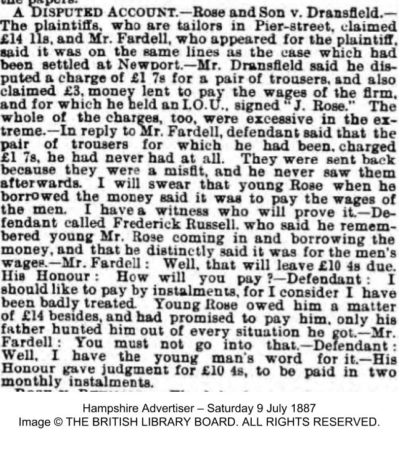 It is clear that Edward saw himself as a bit of an entrepreneur. Not content with owning property in Russell Terrace on The Strand he developed his tailor’s business by purchasing an outlet in Chipping Ongar in Essex. Edward spent several years growing this business until his eldest son, Thomas, was ready to take over. His next outlet was situated in Ryde on the Isle of Wight. Edward’s second son, Frederick ran this business. Unfortunately, he had failed to inherit his father’s business acumen and Frederick and Edward were declared bankrupt and their partnership dissolved.

During his latter years, Edward battled Parkinson’s disease and died on June 20th 1899 at his house ‘Ongar Villa’, Canada Road. His wife, Sarah, outlived him by 8 years.

Newspaper image © The British Library Board. All rights reserved.
With thanks to The British Newspaper Archive (www.britishnewspaperarchive.co.uk).