In London, following the Great Fire, the first fire insurance companies were founded. The Phoenix Fire Office was the first in 1680 and was soon followed by the Friendly Society in 1683, Hand-in-Hand 1696, Sun Fire Office 1710 and Royal Exchange Assurance in 1720. By 1802, almost a century later in Maidstone, Kent Fire Insurance was founded.

These companies soon realised that it would probably be cheaper to put out the fires rather than to pay for the rebuilding of the properties or payout on the insurance. So began the Insurance Fire Brigades and the issuing of company ‘Fire-Marks’.

Fire-Marks were placed on buildings to indicate that the property was insured. They also served to promote the company and possibly even as a mark of financial status to passers-by.  In Deal, as elsewhere, you can still find fire-marks on some of the town’s older buildings. However, as they are now collector’s items, they may not always be on the originally insured building or even an ‘antique’ fire-mark itself.

In the larger towns and cities, there were apparently even occurrences where one insurance companies firemen turned up at a fire only see that the property didn’t have their own company’s fire mark and so they left the property to burn! Eventually, reciprocal arrangements were made between the insurance companies, so that if one brigade put out a fire at a house that was insured by another company then that brigade’s company would be reimbursed.

However, the main aim was not to save lives but to save and protect the insured property and its contents. In response, to the public’s concern over the loss of life, the Fire Escape Society was formed in London in 1828. Funded by private donations it strategically placed wheeled escapes in London’s streets so that they could be used to save lives. It was eventually taken over by the Royal Society for the Protection of Life from Fire in 1836. 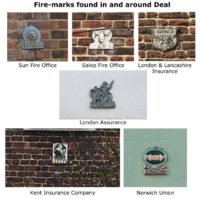 In Deal, those residents who wanted and could afford to insured their properties against fire with the various insurance companies. The town though, until 1874, had to rely upon the men, engines and escapes belonging to the Garrison, to Hills’ Brewery and until its closure, in 1864, that of the Dockyard and of course the efforts of the townspeople themselves. Helpful though this was problems in rousing and gaining access to these machines, and men to man them, caused delays and so more damage to property and or danger to people themselves.

Then on Tuesday 29 October 1867, two days after the Walmer Castle Hotel fire, that damaged the next-door home of George Wilkins, a meeting was held.

According to the Deal, Walmer & Sandwich Mercury, a letter of concern was sent to the Mayor, signed by many inhabitants of the town. This resulted in a meeting being held at the Guildhall to consider  “.. the necessity of providing a fire-engine and escape for the use of the town…”The majority of the signatories attended this meeting.

John Iggledun was voted into the chair and opened the meeting by explaining that the town had relied on the engines and services of the Dockyard which the Admiralty had closed, and also that of the Garrison he then pointed out that it was impossible to tell how long the military would also remain in the town.

The Mayor, William Matson Cavell, who through illness, did not attend the meeting sent a statement saying that he had, on more than one occasion raised the subject of a town fire-engine, particularly at the time that the Dockyard closed. The Town Clerk on these occasions stated that there were “…no funds to purchase an engine for the town or if the town council actually had the power to do so.”

A special meeting was then agreed to be called soon after to discuss these matters.

Mr. Tomlinson a barrister was consulted and he was of the opinion that the Overseers of the Vestry were the people to purchase the engine by means of the poor-rates.

A letter to the editor of the Deal Walmer & Sandwich Telegram stated that  “…at the meeting, the Mayor (Mr. Cavell) said it would cost £200, but no money was available for it. Another public meeting could order the Overseers to make a rate for it….”

So a Vestry meeting was then held at The Guildhall, on Thursday 21 November 1867, where a“numerous body of ratepayers attended.”  The Rector Reverend T.L. Griffith was in the chair and he explained to those gathered that this meeting was called “….in order that the inhabitants may express their opinion as to whether they will have a fire-engine or not. It rests with the vestry here assembled to resolve either that the overseers shall or shall not have that authorisation…”

Many questions were asked including from some landowners who felt that they should not pay the extra rate for the fire-engine if it was levied on the land. Thus, the meeting became a heated one. Questions were asked about the fire-insurance company, Sun Office, and  Mr. Kemball said: “….that if the engine were provided by the fire-offices it would only be allowed to attend where the property was insured.” 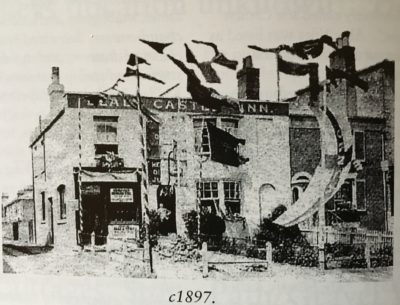 Then Reverend J.T. Bartram proposed “….the idea of getting the fire-engine by public subscription….” this met with a majority vote of hands. However, no real action seems to have taken place until in 1874  when it was reported that the council had written to the ‘Royal Society for the Protection of Life from Fire’.  This brought about yet another public meeting, this time held in the Deal Castle Inn on Victoria Road, to discuss the formation of a Volunteer Fire-Brigade. 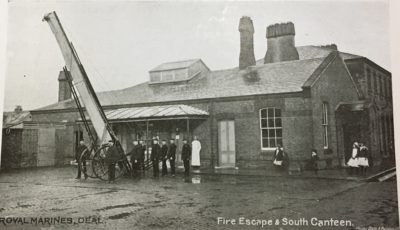 Following the Walmer Castle Hotel fire in 1867 and the subsequent meeting, there was already a list of men willing to be Volunteer Firemen. This appears to have been instigated and drawn up by  Dr. Thomas Edward Mason. He was now duly elected Superintendent with others taking up officer posts including that of First Engineer, by Mr. W. Dunn, who had served in the London Metropolitan Fire Brigade.

By July 1874 the officers of the Society for the Protection of Life from Fire had visited the town and an escape was ready to be delivered and the newspaper report tells us that part of the “…Market-place was given over to house the escape…” As there is no such named place in Deal it is probable that the Fish Market is meant as it is here, from 1869,  that some newly purchased Fire apparatus was stored.

The officers of the new Deal Volunteer Fire-brigade got to work checking the fire-plugs throughout the town. Many were found not to be in working order and also additional ones were required for which the Water Company would have to be conferred with. A recommendation for a hand-pump and an extra hose was also made.

In the meantime, following instruction from the Society,  the Brigade was proclaimed competent to manage the escape. It was then proposed that the Brigade be issued with the  “….necessary uniforms and accoutrements in compliance with the resolution….”  Part of the agreement to receive an escape, from The Royal Society for the Protection of Life from Fire, was that the recipient towns had to purchase uniforms and helmets.

However, the town still had to rely on the Garrison and the Hills Brewery engines.

“…. We have built a place for its reception- we have a strong and efficient Fire Brigade, we have hose, buckets, pumps, and sundry apparatus. We have equipped our Brigade with tunics, helmets and other appliances, and the house is big enough to store an engine if we had it….”

He had also looked into the cost and the types of engines that neighbouring towns had. Further costing reports were requested including the yearly expenses that would be incurred. These reports concluded that the Town Council could not afford the expense of a Fire Engine.

Yet again another public meeting took place, in August 1875, this time at the Locomotive Tavern on West Street, with the entire Deal brigade in attendance. Here they considered the fact that as the Council had rejected the idea of purchasing a town fire-engine, they would open up a public subscription. This was unanimously resolved and brigade members were then each appointed districts for the purpose of canvassing and collecting subscriptions. 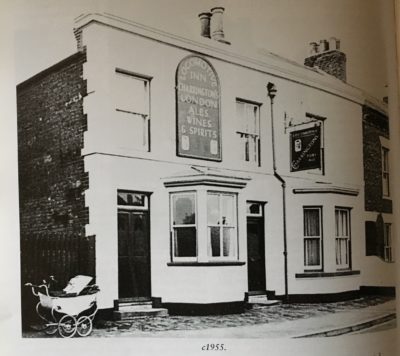 Three months later, on Monday 8th November, the town’s fire-engine, purchased from Messrs. Merryweather’s of London at a cost of £197 8s 6d, finally arrived by train. The carriage cost,  of £2 5s, was paid by the South Eastern Railway Company itself. 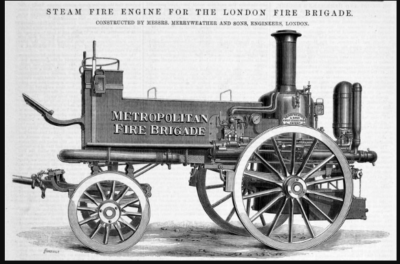