George Wells Woodcock was born in Deal in 1849 to John and Mary, nee Wells, Woodcock. John was a Whitesmith which meant he worked in light metals such as tin unlike Blacksmiths who worked with raw iron. Whitesmithing or tin smithing, as it was sometimes known focused on manipulating these lighter metals and adding finishing touches through filing, polishing etc. John’s father had been a Blacksmith at the same property where George was brought up, 2 Queen Street, and where his father continued to work with metal, but in a more artistic and refined way. George would have watched as his father produced candlesticks, locks and keys, stirrups and buckles to name but a few items. These would be sold on to the Ironmongers in the area or ‘hawked’ by travelling smiths.

By 1861 George, at the age of 11 is still at school while his father is now calling himself an Ironmonger and was, possibly, both making and selling his own goods.

Within 10 years George has met and married Elizabeth Rose, daughter of Edward Rose who kept his trade as a tailor on The Strand in Walmer. Elizabeth was the eldest of twelve children so, no doubt, looking forward to setting up her own home and marrying the son of an established tradesman of Deal must have seemed an excellent and exciting prospect. George does not follow his father in to the Whitesmith trade but opens a Grocer’s shop on what was called in 1871 Walmer High Street, but what we now know as the Dover Road. The original shop is still there although now run as a bakery. 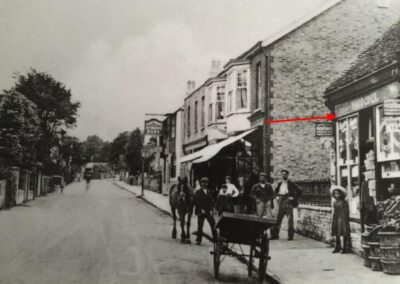 If Elizabeth was enjoying the peace and quiet of her own home away from all her siblings it didn’t last long. Her first child, Emma Louise arrived at the end of 1871 and from then on Elizabeth regularly produced a new member of the family until she had 12 of her own. In both the 1881 census and 1891, George and Elizabeth remain at the shop in Dover Road but by 1901 they have moved to Great Mongeham where they continue their trade as Grocers. The 1891 census tells us bathat George and Elizabeth are now grandparents. After investigation we discovered the oldest daughter, Emma, has given birth to an illegitimate son, Walter Charles Woodcock. We are not sure of the life Walter had after his mother married but, at an early age, he leaves Walmer to become a cook in London. It seems Walter decides to join the 4th Battalion City of London Regiment and at the age of 18 he joins the 3rd Lancashire Fuselliers to gain his training at their HQ in Bury, Lancashire.  Walter ( or Charles as he preferred to be known ) must have been in trouble as on the 29th May 1911, at the age of 20 years he ‘deserts’ the regiment re-joining on 25th July. He then transfers to the Royal Dublin Fuselliers  and remains with them until his death, in Belgium, on 17th June 1915. He is buried in Roeselare Cemetery.

It seemed to us that George and Elizabeth had a successful marriage, making a good living with their Grocer’s shop but, unfortunately, a report in the local newspaper tells us otherwise. Under the heading of ‘George Wells Woodcock, of Station Rd, Walmer, Grocer’s Assistant, the report tells us that George owed £110 15s 11d and had only £25  5s 11d to pay them with leaving him to find over £85 to repay the debt. George goes on to tell the court he has been a grocer for 35 years and was insolvent for most of that time. In fact, this is the fourth time he has filed for Bankruptcy stating the years 1874 ( 4 years after his marriage) , 1883 and 1891. He was still awaiting his discharge from the last Bankruptcy! George says he has no recollection of his last Bankruptcy. He tells the court he has been in poor health most of the time, under the Doctor for three years. He has failed to keep any books and blamed competition and poor trade for his demise. We presume the family moved to Great Mongeham in 1901 to better themselves but once more, in 1904, George is back before the court and again in 1906.

By 1911 George is a ‘retired’ grocer and he and Elizabeth are living in Downs Road, with several of their now adult children who are possibly contributing to the rent on the property and helping Elizabeth who was losing her eyesight. They continue their lives together until 1925 when Elizabeth dies. George is a widower for eight years passing away in 1933. They are buried together in the churchyard of The Blessed St Mary’s, Walmer.

Sources and further reading:
Newspaper image © The British Library Board. All rights reserved.
With thanks to The British Newspaper Archive (www.britishnewspaperarchive.co.uk)
CWGC