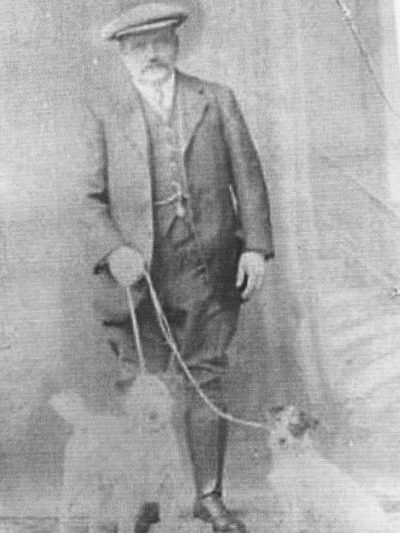 Herbert Vincent Rose was born in Walmer in 1858. His father was Edward Thomas Rose and his mother, Sarah nee Cavell. Herbert was baptised using his maternal great-grandmother’s maiden name, Vincent, as his middle name. The Rose family resided at 7 The Strand on the sea front at Walmer. He grew up in a, generously sized, three story building with 13 siblings where his father was a well- respected Master Tailor. At the age of 13 years Herbert moved, with his father and some of his siblings, to Chipping Ongar in Essex where his father had purchased another tailor’s business in the High Street. A bespoke tailor and breeches maker, they also made uniforms for members of the Essex hunt. Herbert’s mother, Sarah, and the rest of the family stayed behind in Walmer to keep the business going on The Strand with eldest son Thomas in charge of the workroom. 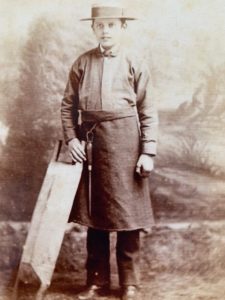 The tailor’s shop in Chipping Ongar shared its premises with Cowee the butchers, the workshop being behind the premises over the butcher’s slaughterhouse. The Roses and the Cowees were to be united in 1871 when Louisa Sarah Rose married Thomas Cowee. With frequent family trips to Ongar and the proximity of a butcher’s shop it’s not surprising that Herbert became an apprentice to that trade.

Young boys learned the art of butchery through a traditional 7 year apprenticeship.

On completion they were known as Journeymen Butchers. I have no proof as to who Herbert was apprenticed but it may have been the Cowees of Chipping Ongar. The Worshipful Company of Butchers is one of the oldest in London. Butchers were highly skilled, entrepreneurial, physically strong and hard working. 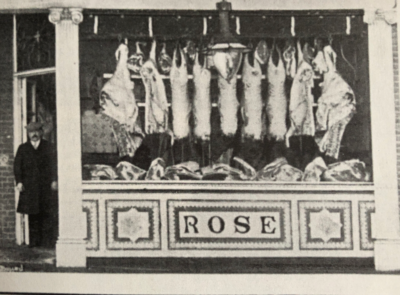 He now has his own family having married Emma Fannie Darby, daughter of a widowed landlady from Essex. After 1890 Bert decides to expand and opens other shops at 155, High Street and Queen Street, Deal.

By the age of 23 Herbert had opened his own shop in Walmer on The Strand around 1885. 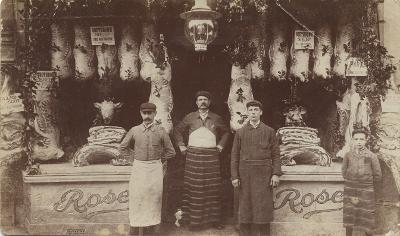 Advertising was important to make your business and name familiar amongst the town folk. In this image we can see how Herbert must have paid to erect a board, advertising his shop on the side of Deal Pier.

Bert purchased live animals from farms such as Lord Northbourne’s at Betteshanger and had them driven to his slaughter house in Middle Street. He probably slaughtered his own animals and butchered them in to cuts or joints of meat; then he ran the shop. Bert would have worked extremely long hours with the shop being open from 8am -8.30pm Monday to Thursday, Friday until 10.30pm and midnight on a Saturday. It is said late evening was popular with wives who knew, once the beer houses were closed and husbands ‘sleeping it off’,they could take the little money left and purchase the cheapest cuts of meat for Sunday lunch and to see them through the week. It was a busy few hours for the local butchers and worth staying open. Herbert also employed a young man called, Jack, as a delivery boy. In his diary George Rose writes about accompanying Jack, both on bicycles, to Kingsdown where deliveries are made.

Tradesmen like Herbert relied heavily on their sons for assistance. Sadly, he and his wife Emma were to lose two of their boys to meningitis in their infancy plus a young daughter.  Herbert’s eldest son, Ernest, emigrated to Canada at the age of 18, as did Percy in 1912 aged 19. Having been a volunteer in East Kent Buffs for 2 years he signed up to the Canadian Over-seas Expeditionary Force on October 4th 1915. Both Ernest and Percy remained in Canada for the rest of their lives although Passenger Lists for ships travelling to this country inform me that Percy did return for a visit with his wife, Mary, and baby son John.

Herbert was to lose his wife, Emma too. She passed away in 1894. Her death certificate declares endometriosis and exhaustion as the cause of death but, there is no doubt, her heart must have been broken at the loss of her little ones.

Six years later Herbert remarries. Kate Jane Mortimer is nearly 20 years younger than her husband and only 5 years older than his eldest child. He and Kate have one child together, Ronald.

Like his father, Edward, Herbert is heavily involved in the community. He is a member of Walmer Council and is called upon to be a Jury member for the court at Sandwich several times.

In 1896 Herbert must have been shocked by the news from Dorset that his older brother, Frederick, had been arrested for being drunk and disorderly in Weymouth and, after being thrown in to Dorchester prison, had died penniless leaving a widow and 5 children. His father had been diagnosed with Parkinson’s disease and passed away in 1899. With his elderly mother, Sarah, dying in 1907 it seems Herbert feels it is time to retire from the Butcher’s trade and he, Kate and Ronald leave Walmer to settle in Croydon where they purchase a newsagent and tobacconist’s business. In 1927 Herbert dies. Kate continues to live with Ronald, and his wife Dorothy, running the business throughout WW2.