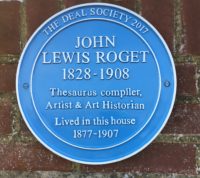 The name Roget is of Swiss origin. John was descended from Genevan Calvinists and Sir Samuel Romilly, the legal reformer, of Huguenot stock. His father, Peter, compiled the first Thesaurus of English Words and Phrases in 1852.

John’s mother died when he was five and he was brought up in Bloomsbury with his sister Catherine. Catherine never married and requested to be buried with her father. John went up to Trinity College Cambridge in 1846. He received a BA in 1850 and an MA in 1853. The same year he joined the Society of Lincoln’s Inn and was called to the bar on April 30th 1853.

John Roget married Frances Ditchfield, the daughter of a Bolton doctor. It seems Frances had a childhood connection with Walmer and Deal and must have encouraged her husband to spend family summers in their house 13 The Beach, Walmer. It is not known if they were at home during the great storm and whirlwind that hit Walmer on October 24th 1878. The houses along Walmer beach sustained considerable damage during this unusual event.

Roget retired from the Law by 1871 and by 1880 he appears on the electoral register for Walmer. During his retirement, he re-edited and updated his father’s Thesaurus (as did his son, Samuel Romilly Roget, in 1950). He became an honoury member of the Water Colour Society and wrote two volumes of ‘The History of the Old Water Colour Society’.

John Roget is most famous in East Kent for publishing the book of Water Colours of Deal, Walmer and Sandwich. A copy of the book can be found in Deal Library.