We had some difficulty tracing the family of my 4 x great uncle, Peter George Pettit, who was married to my 4x great aunt, Elizabeth Rose. This was chiefly due to some confusion over the spellings of the surname, Pettit/Pettet/Petitt/Petett etc. After rigorous research I am certain that the information entered above is correct.

John, a carpenter, seems to have been born in Wingham. We don’t know when he actually moved into Deal, but he married Ann there in December 1802. George, their eldest son, had been born eight months earlier! By 1803 Britain was at war with France and John was registered on the 1803 Lieutenancy Papers for Deal. They tell us that he was a volunteer in ‘Mr. May’s Company’ which would have been rather like the Home Guard of WW2.

John and Ann were to have eight children. Several died young and several, like John himself died in Eastry Union Workhouse.  Ann lived until she was 80 years old dying in 1861 and outliving her husband and several of their children.

Born in 1810, Peter George was John and Ann’s third child, he married Elizabeth Rose in 1838 and they set up home first in Union Row then later moved to Middle Deal Road. They didn’t have any children and Peter continued to work as a gardener until his death from consumption in 1852. He was nursed at home by a private nurse.

Thomas Mantle Pettit became a Royal Navy Prison Warden on the prisoner hulks that were moored in Portsmouth Harbour. He and his family lived in Forton Rd, Gosport and he is included in a newspaper report telling of his part in a murder, on board one of these floating prisons. At a later date he leaves the navy to become the landlord of a Public House in Brighton. His wife dies in Brighton, and it seems he returns to the Portsmouth area where he becomes Landlord of The Belmont Arms in Bedhampton and remarries. He eventually retires to neighbouring Havant where he died in 1896.

At a later date he leaves the navy to become the landlord of a Public House in Brighton. His wife dies in Brighton and it seems he returns to the Portsmouth area where he becomes Landlord of The Belmont Arms in Bedhampton and remarries. He eventually retires to neighbouring Havant where he dies in 1896.

William Terry Pettit seems to have been either more adventurous or, perhaps, good at spinning a tale! According to the 1861 Census, he was a ‘retired Australian sheep farmer.’ We have been unable to uncover any concrete evidence to support his claim but we cannot find either he, or his parents, on the 1851 census. Did they all go to try their luck during the Australian goldrush during 1851?  In 1861 he called himself a ‘Widower, but no trace of a marriage can be found. WT, as he prefers to be called, returned to Deal, became the landlord of The Deal Castle, involved himself in local politics and in 1862 was made Mayor of Deal. I’m not sure how successful a Mayor he was but he only completed one term. He was involved in the bankruptcy case in 1865 concerning Kemp the Grocers of Lower Street, Deal. He died in 1874 in the Union Workhouse. An event that is startling enough to be mentioned in the newspaper. Of course, people were admitted to the Workhouse if they were sick, as these institutions often doubled as Hospitals for the local parish, if they were not wealthy enough to employ a private nurse or surgeon at home, or without a close relation to take care of them. 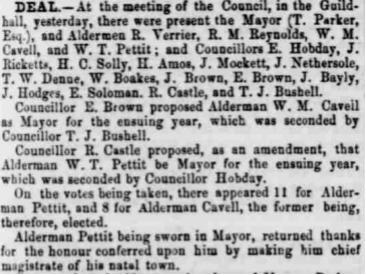 Sources and further reading:
Newspaper image © The British Library Board. All rights reserved.
With thanks to The British Newspaper Archive (www.britishnewspaperarchive.co.uk)