King Street, until about 1804, was known as Whetstone Street.
A Nicholas Whetstone had leased a tenement there from the Archbishop of Canterbury in 1679.
As Deal’s Postmaster it was his job to light fires on the beach as a signal to ships to send their boats to collect despatches. It is quite possible that the street then became known by his name. 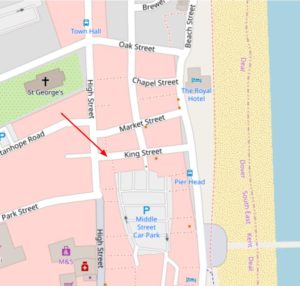