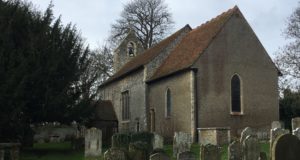 The Church of the Blessed Saint Mary the Virgin

Officially known as The Blessed Virgin Mary Church, the Old Parish Church of St. Mary’s was founded sometime around 1120 and is thought to have been built by the Auberville family as a private chapel. They also founded the adjoining Langdon Abbey and gave St Mary’s to them in whose ownership it remained until the dissolution when Henry V111 granted it to the Archbishop of Canterbury.

The registers are available online from 1560 and include those for the new church of St. Mary’s the Virgin.
The burial records include those persons from the Royal Naval Hospital and the North Barracks in Lower Walmer. Initially, these were recorded in separate lists, but from early 1800 the two hospital lists were combined so from January 1805, all burials in Walmer were entered on the same return, distinguished by CB for Church Ground & NG for Naval Ground.

Following the restoration of Charles 11, it became a custom to mark the death of an armigerous family, to paint his or her coat of arms on a board or canvas, usually in the shape of a lozenge.

There are six hatchments hanging in St. Mary’s including one for  Duke of Wellington who worshipped here whilst staying at Walmer Castle as Lord Warden of the Cinque Ports.

The Church is set in its burial ground and was extended several times the last time in 1864. There are also fifteen Commonwealth War Graves within the churchyard four from WW2 and eleven from WW1.

Sources:
Records of Walmer together with “The Three Castles that kee the Down”  by Charles Robert S. Elvin