Pride of The Sea 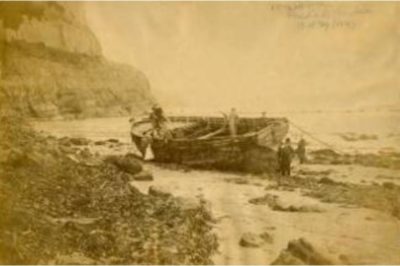 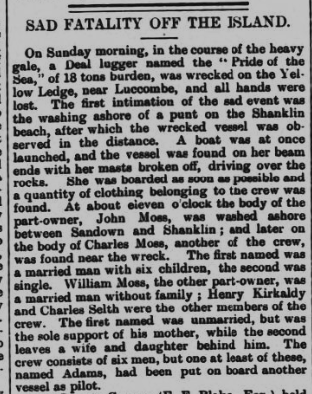 ‘Pride of the Sea’ a Walmer lugger was lost off the coast of Shanklin on the morning of 30 October 1887. It was crewed by the Moss brothers John, William and Charles Moss and Charles Selth, Henry Kirkaldie and Thomas Adams. All but Thomas Adams were lost, he had been put on board a vessel, to pilot it to Dunkirk, on the Thursday before the accident happened on that fateful  Sunday, and he knew nothing of it until his return to Deal.
Pride of the Sea was owned jointly owned by the Moss brothers, who for ten or so years had worked hard to pay for it and had only just cleared off the last of the mortgage. At the time the insurance on vessels like these was too high to make the premiums worth paying. Those living on the coast knew this so everything was always done to save as much of the vessels as could be saved. However, in this case, the dreaded red tape, then as now, intervened. The wreck departments required that all vessels should be inspected by an officer before it was touched. Sadly, that being the case, Pride of The Sea was left on the rocks and the sea ‘beat her to pieces’.
John Moss was the first man washed ashore and he with his fellow crewmen was laid to rest in the cemetery at Shanklin. A funeral service was also held at Walmer’s St. Saviours Church and a fund started on behalf of the widows and orphans. In the December of that year, on the Isle of White, a concert was held in aid of the families of the crew of Pride of the Sea.
A monument was later erected to the men and has in recent years been restored. 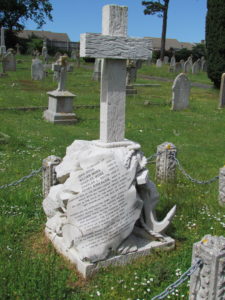 Owners and crew of the Walmer Lugger Pride of The Sea which with all hands lost in the gale of the night
of 29th October 1887 off Shanklin in the Isle of Wight.
“Underneath are the everlasting arms” Deut. xxxiii., 27
“O Christ, Whose voice the waters heard  And hush’d their raging at Thy word, Who walkedst on the foaming deep, And calm amidst the storm didst sleep; O hear us when we cry to Thee For those in peril on the sea.”
Be ye therefore ready also: for the Son of Man cometh at an hour when ye think not,” St. Luke xii., 40
“This stone has been erected by the men of Deal, Walmer and Kingsdown and by other sorrowing friends”

In the Deal Maritime and Local History Museum, there is a framed poem ‘The Pride of The Sea ‘ 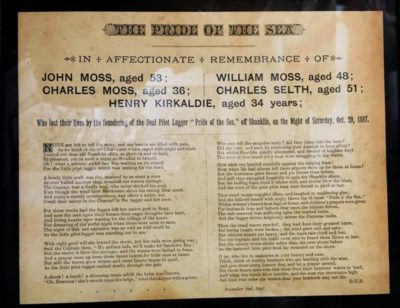 Interestingly Hannah Moss, widow of William Moss, after his death lived in a cottage in York Road, Walmer named Shanklin and Thomas Adams, the sole survivor, for many years was the owner of a sailing yacht the Moss Rose! Was this their way of remembering the crew of Pride of the Sea?

Sources and further reading:
Last of the Luggers by E C Pain