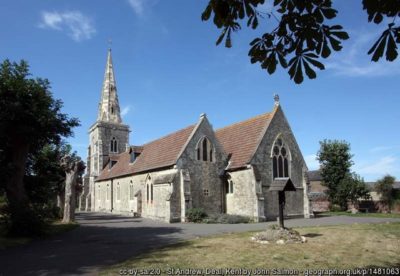 When the town further expanded into the North end those seafaring families that settled there found they needed another place of worship.

Money was raised by the townspeople of Deal to build this new church on the site of the old workhouse that had closed in 1836. Known as the Boatman’s Church it was consecrated in 1850 and dedicated to St. Andrew, the fisherman apostle, and was originally a chapel of ease. Then in 1867, it became a parish in its own right.

The registers of St. Andrew’s are online with baptisms and marriages dating from 1852 and burials from 1853.

The churchyard was consecrated for burials 1853 and originally entered by a lantern-lit gateway in West Street but later an opening was made in the boundary wall in St. Andre’s Road. The gravestones have now been moved with some arranged around trees although there are a few, in situ, by the west door.