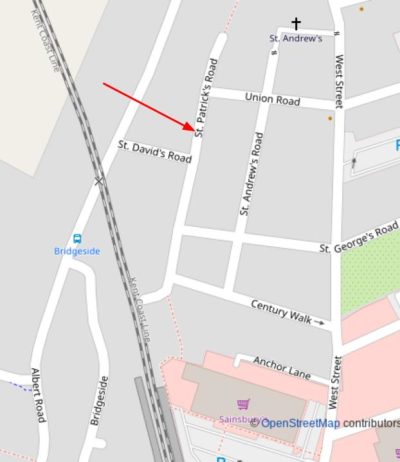 In the early 1800s land was purchased by the parish of St.Leonard’s called ‘Potter’s Field’. This was in the area that is now St. Patricks Road. It was then used and known as the Stranger’s Burial Ground and where bodies washed up from the sea were also buried here.

Potters field apparently got its name from The Gospel of Matthew in which it refers to the thirty pieces of silver paid to Judas for his betrayal of Christ and the subsequent purchase of the ‘Potter’s field’.

Deal’s  Workhouse was built nearby, now where St. Andrews Church now stands. A piece in the local paper in 1864, remarks on the contrast in the appearance of that area to

“…that of the old workhouse and Merchants Field with its ditches and stagnant water…..”  Merchants Field was the area that is now covered by St. Patrick’s, St. David’s and St. Andrew’s Roads.