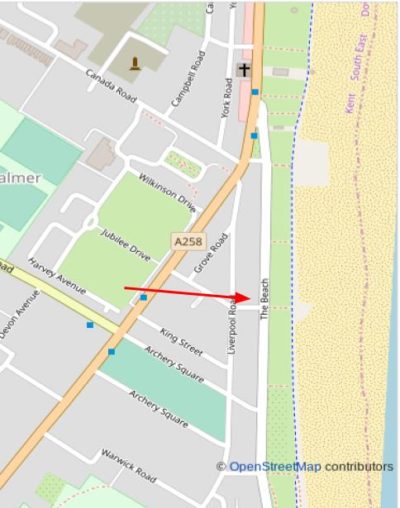 The Beach, Walmer AKA Marine Parade

There are many grand houses in Walmer but, perhaps, none as stunning as those that overlook Walmer Beach where Julius Caesar, supposedly, came ashore.

Along from Walmer castle, towards The Strand, there were cottages, fishermen’s huts on the beach, and Walmer Lodge which is thought to have been built on the site of the demolished Marine Hotel. The Lodge (only 10 bedrooms!) was eventually knocked down to make way for Lady Stanhope’s Walmer Place, a huge solid mansion, just a small part of which can still be seen today.

In his book, History of Deal 1864, Stephen Pritchard tells us that Rev Ladd of Littlebourne acquired areas of land along the beach where he then began to erect the first terrace. The Reverend obviously had a good eye for investment as he set about building Lodging Houses for the increasing number of visitors to Walmer.

From the middle of the 18th century, the medical profession began to promote sea-bathing as efficacious for health. Seaside towns, such as Margate, Ramsgate and Folkestone, became extremely popular especially with the appearance of bathing machines which allowed ladies to take to the sea with a certain amount of privacy. These resorts had one huge advantage over Deal and Walmer – they were blessed with sandy beaches.

Despite Walmer’s shingle, it was popular with visitors who perhaps shunned the idea of putting their flesh on display, or had actually tested the temperature of the English Channel! They enjoyed a bracing stroll along the newly built promenade and then down the pier, maybe taking advantage of the daily steamer that would efficiently take them, in comfort, along the coast to Margate, to enjoy a day on the sands with their children.

The season generally ran from August to October. People were keen to get away from the big cities, including London, and to arrive at a lodging house, in Walmer, that had beautiful sea views towards France and The Downs. It must have been a wonderful start to your holiday.

The terraces were built in a late Georgian/Regency style. Fashionable new homes, modelled on London properties, served the tastes and expectations of well-to-do visitors.

How much was the Reverend Ladd charging? From research, it seems rent was around £16 a month in high season, down to £10 a month in the Autumn, when impoverished artists and writers would often inhabit the empty flats after the city folk had returned home.

As more homes were built along what was then called Marine Parade, and is known today as The Beach, it became a fashionable area of Walmer for men from the Royal Navy to bring their growing families or often to see out their days, as retired Admirals did.

We have researched a few of these families and their details are available on this website. You can find them by visiting  The Beach Families page.