A chance find in the Deal Museum Archives Collection of Newspaper Transcriptions led us to look at this character. For a character he certainly was.

Jane married Samuel Brown of HMS Severn in St. Leonard’s Church in 1822. So far though, we haven’t been able to find a death record for Samuel, but he must have died before Thomas’ baptism on 13 July 1823 which states he is the  “ille.” son of widow Jane Brown and that he was born in West Street.

Thomas, not unsurprisingly known as Tom, was nine in 1831, when his mother married again and rather confusingly to another Thomas Brown. A year later a daughter was born and yes, they named her Jane!

By 1841 the family were living in West Street, where according to that year’s census there is another daughter named Elizabeth with them who, according to the census, was also born in 1832 like her sister. However, we feel that this is an error as her supposed sister’s full  name is Jane Elizabeth and there is no other record of an Elizabeth being born at roughly the same time and no other subsequent records for her either.

The family are still living all together in West Street at number 50 in 1851 by which time Tom is thirty years of age and a general labourer like his step-father. Tom’s sister Jane married George Larkins Bayley in 1855 sadly though he died in 1863 leaving Jane to bring up their young family on her own. Consequently, she moved back into her childhood home.

The elder Thomas died in West Street in 1858 and by then Tom was well on the path to notoriety.

It seems that he liked a drink or two which led him, at times, to being a congenial drunk but unfortunately also a violent one.

The first record of Thomas being in trouble is In 1857 when he , with Isaac Atkins, was in court for stealing “…some pork and part of an apple pie…” on this occasion he was simply charged with the offence.

But a few years later, in 1860, he was described as a ‘notorious disorderly’. His poor mother must have been terrified as he threatened to cut her throat, and set fire to her gown, presumably and hopefully, she wasn’t wearing it as he admitted to this and to breaking a table. Unashamedly, it seems,  he said that he was drunk and could “…recollect nothing of what took place…”

This time it was his sister, Jane Bailey,  who brought  charges against him. In court she described how Tom arrived at her house in West Street at midnight “…very tipsy…”. She obviously felt threatened by him, so she locked the door to keep him out. Thomas, determined to gain entry, forced open the window and climbed in and “…smashed up…” her furniture.
Jane wanted, she said, to be protected from his violence. Tom retorted with ”… if she had  opened the door I should not have got in the window…”
The Magistrate told him that he must be locked up again to which Tom responded “…I have but two homes, one in West Street and Sandwich Gaol…”
Tom, almost braggingly, told the court that he had been in Sandwich Gaol eight out of the last 12 months.
The Magistrate wanted to give him three weeks, but Tom said “…what’s the use of that; give me all you can…”

The court must have put some kind of restraining order on Tom to protect Jane but she was not to be rid of him. In September the following year  he was once again up in court in front of Magistrate Edmund Brown  where he appeared in default of keeping the peace especially towards his sister.  On the printed charge sheet, written by hand it says

“ Convicted in October 1867 for stealing a Carpet – 4 weeks hard labour
He has been summarily convicted upwards of twenty times for assault and drunkenness.
Is a Very Bad Character.”

This was just one month after another court appearance where Tom was described as an “extraordinary character” which he certainly was. On this occasion his drunkenness, though, didn’t get out of hand and he simply walked away!! 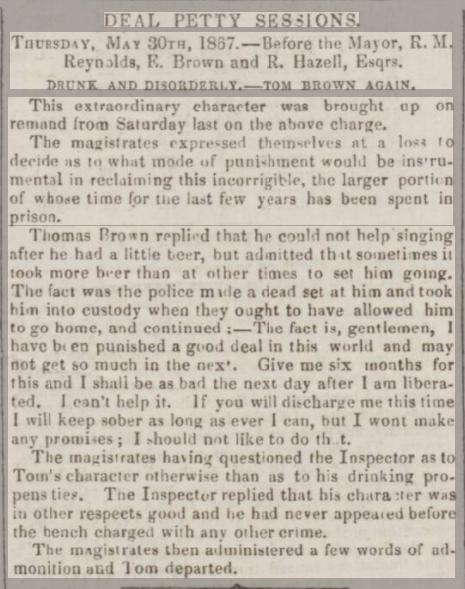 In 1866 Tom’s mother died in her West Street home. No wills have been found in connection to Tom’s family which may, if they ever existed, have given us a clue as to the freehold or leasehold of 50 West Street. Tom in court mentions that “ there was a will of sorts made by a shoemaker…” and that “…it was a roguish piece of business…”  The family do seem to have managed to remain in the house from at least 1823, when Tom was born and, as you will see, until at least 1891 suggesting either they owned the freehold or had a regular income to pay the rent. Tom being in and out of gaol and drunk most of the time obviously had little or no money to contribute to the household budget. His mother was described as a pauper in the 1861 census and his sister Jane as a charwoman in 1871 and  1881 and of no occupation in 1891. Given that most people of their class at that time with little income moved at least once or twice during their lives it seems odd that the Brown family did not.

By 1871, Tom was in court again , and yet again his poor sister was suffering from his actions, this time he stole her coat for which he was sentenced to eighteen months with hard labour. The reporter remarked that Tom had been in gaol forty-nine times by then!  It seems Sandwich Gaol was fast becoming not his second home but his main one.

Once again in 1873 Tom is in court though he does seem, as the reporter says, to have kept out of trouble for longer than usual. He by now at least recognised that he had a drink problem even saying that sending him to gaol was of no use and if sending him to prison could have cured him it would have by now.

Drunk in the Street

As said at the beginning, a chance find brought us to look at Tom Brown, this find led to several others
The first of these was dated 12 May 1877, so four years later, and reading between the lines of the transcription, Tom continued to succumb to the demon drink.

Tom Brown was committed to his old quarters again, the lock-up, on Friday afternoon last, for being drunk in the streets.
He was accommodated there with board and lodging until 10 o’clock Monday morning, when his sobriety being ensured he was
brought before the Magistrates and received private admonition.
Tom was as usual repentant, and assured his worship, for the hundredth time, that he would keep sober all the summer.
His promise was accepted and he was discharged.

Somehow, we don’t think he was actually believed and true to form, in October, Tom was once again in court.
The newspaper transcript this time says

Re-appearance of Tom Brown. This extraordinary character figured once again on the old charge.
From the evidence of Superintendent Capps, it appeared that on the previous day Tom was up to his old pranks- dancing about etc,
and on this occasion just outside the Police Station.
In answer to the Chairman, Tom said: I am not guilty sir.
The constable came to me and said “Where are you going Tom? Come and lay down a little while”.
The Chairman said “I thought you were quite an altered man.
To which Tom replied so I am sir. I have not been drunk since I saw you before. But yesterday I took a little and it affected my head.
I went and laid down when the constable asked me to, and I feel better now.

Tom was sentenced yet again for seven days.

Sandwich Gaol, the place Tom perhaps considered to be his second home, closed in May 1878.  What effect that had on Tom we obviously don’t know.

There is a gap of nine years before Tom reappears in the transcriptions again but as the headline says ‘Tom Brown in Trouble Again’ we may be assured that he had continued to habitually get drunk and to appear in court. The transcription tells us that in June 1886 Tom was charged with being drunk and disorderly in High Street near Jews Harp Alley and for assaulting PC Mercer. PC Mercer had tried to apprehend him when he saw Tom “…rush out of the alley making an awful noise…” Tom was fined 10 shillings for being drunk and disorderly and £1 for assaulting a police officer. Though he probably chose to do fourteen days of hard labour instead!

Unfortunately, the 1901 census for Deal has not survived, but it does for Eastry and it is in Eastry Union that we found Jane. Whether she stayed there until her death in 1906, but we don’t know but she was buried in Hamilton Road Cemetery on October 26th and the record states she died in Eastry Union Infirmary.

The last definitive record we have for our scoundrel Tom is the 1891 census after that there are several tantalising  newspaper reports for a Tom or Thomas Brown but none say of Deal. His death too remains a mystery.