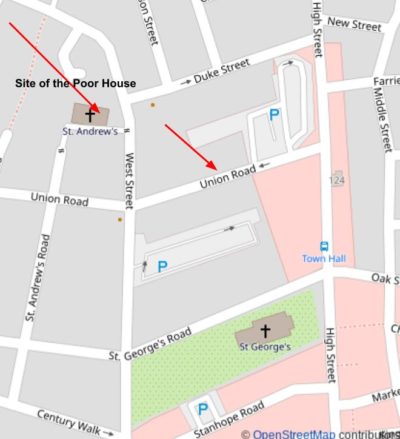 The 1801 Parish Cess does not list Union Row but it does appear on a map dated 1807. Thus giving us an idea of when the road was laid out and built upon.
Following the passing of the Gilbert’s Act, in 1782, groups of parishes were able to form into unions so that they could share the cost of poor relief through ‘Poor-houses’ hence the use of the name of ‘Unions’ given to the ‘poorhouses’ and later to the ‘Work-houses’. So Union Row gained its name as it led to the town’s Poor-house. St. Andrew’s Church was  later built on the site.