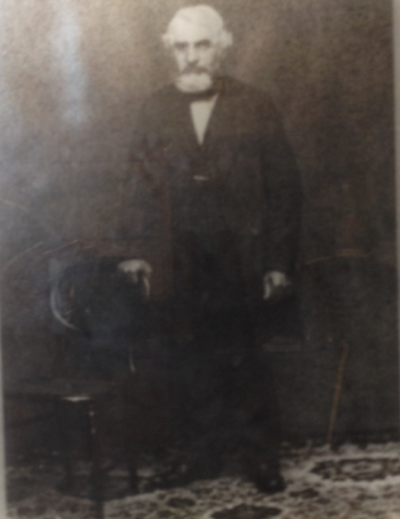 W.M.Cavell was four times Mayor of Deal and was the first Mayor of our town to be elected for a second concurrent term due to ‘the faithful and efficient manner in which he had discharged his duties and the philanthropic spirit he had manifested in reference to the varied charitable projects he had supported.’

William was born in Deal in 1804 and grew up in the town. As a child, he must have experienced a place that was dominated by the sea and its mariners. Deal was described by William Cobbett in his famous ‘Rural Rides’ as  ‘A most villainous place. It is full of filthy looking people.’

In the early 1820’s William left Deal to become a Clerk of Works in the Royal Engineers at Chatham where he met his wife, Mary. He and Mary finally retired to Deal, where William involved himself in the regeneration of the town.

In 1859. a letter was sent to the editor of The Deal, Walmer and Sandwich Telegram again stating the sorry state of Deal.

‘ …with the exception of three gingerbread castles and an irregular range of antiquated buildings, Deal sea frontage is as innocent of the crime of improvement as when Julius Caesar landed nineteen centuries ago.’

During his first term as Mayor, William laid the foundation stone of the Deal and Public Rooms. Later that year, he wrote a letter, to the Kentish Gazette, asking the public to donate to a fund for the orphans, left after their fathers perished in the Deal lifeboat that tried to save the crew of the lugger ‘Fawn’ when it was run down by a steamer on the night of the 1st of August. All hands were lost. 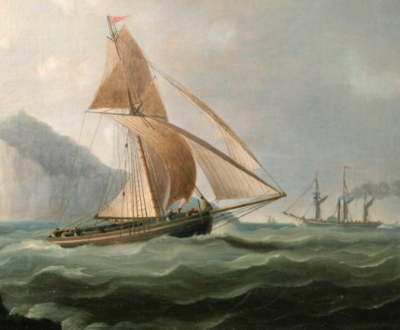 A Lugger and a steamship off the coast of Dover

The original Deal pier was constructed of wood so it wasn’t surprising it was blown down by a gale in 1857. ‘The Deal and Walmer Pier Company Ltd’ was formed and included William Mason Cavell as one of its directors. He campaigned tirelessly along with the editor of the ‘Deal Telegram’ until eventually in July 1864 a new one was partially opened (it wasn’t completely finished until November).

William, the Corporation, directors and workmen paraded through the streets of Deal and finally, the Mayor declared the new pier open surrounded by the bands of the Royal Marines Depot. It must have been quite a day!

The new pier was one thousand feet long, constructed of cast and wrought iron and was supported upon cast iron columns which were screwed into the sea-bed. 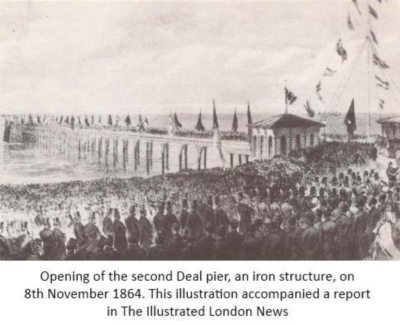 Throughout his three terms of office, William Matson Cavell worked tirelessly to improve the living conditions of the people of Deal. He was a member of the committee that negotiated the purchase and demolition of many dilapidated properties in Beach street from both private owners and the Archbishop of Canterbury who, it seems, included large parts of Deal amongst church assets. 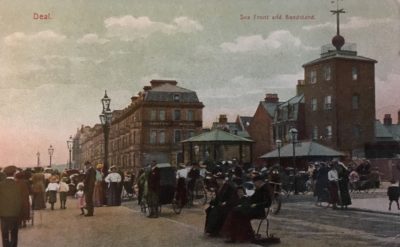 The committee was formed to provide pavements throughout the town and improved drainage. They especially wanted to develop the area from Sandown Castle towards Walmer with a seawall to prevent the frequent flooding during storms and high tides that the area experienced. They planned to provide the public with a promenade for both residents and visitors to enjoy. The Committee felt Beach Street was an eyesore and needed to be cleared. They arranged for the old Watch House to be demolished and a new one to be built, along with a Boat House. These were used, amongst other things to monitor smugglers and to impound the boats.

William appears to have been an important figure in both the town and the Freemasons. A stained glass memorial window is dedicated to him in St Andrew’s church in Deal.

Source:
‘Minutes and Correspondence shewing the progress of the public improvements in Deal’ – Google Books