Occupation: Secretary to the Naval Board

George Smith’s birth is a bit of a mystery. We believe him to have been born in India the son of a Lieutenant George Smith who later rose to the rank of Lieutenant Colonel of the Honourable East India Company. While serving in  Madras, George Smith snr. fathered and recognised, several illegitimate children including one named George Peter. It is quite possible that the mother of all these children was Indian.

On returning home to England George senior married widow Frances Latham in 1788 and in his will of 1821, he bequeaths money and property to her, her children and, as the will states, his ‘reputed’, children or in other words the children he thinks well off. Suprisingly, William Stuart and George Peter, are not mentioned, maybe he had already provided for them or maybe even there had been a falling out.

If it were not for the Kentish Weekly Posts death announcement of Henry Francis Smith, stating that he was the brother of George Smith Esq. of Deal in Kent, we would not have looked at the possibility that George Smith and George Peter Smith could be one and the same.

Then with further research into George junior’s siblings, we found that  William Stuart had children whose baptismal records give the names of their sponsors. These were Sydenham, George and Henry Francis Smith. When Jane Maria marries, both George Smith jun. and George Smith senior sign the register as witnesses.

Secretary to the Admiralty

George was employed by the Naval Board  from the early 1800s. In 1804 we find him giving evidence to the Commissioners of the Naval Enquiry looking into irregularities and frauds by Naval Departments. At this time he was working in Woolwich Yard as a First Clerk. In 1807 he was the Assistant Secretary to the Admiralty then from 1820 Secretary to the Admiralty,  until 1832 when the Naval Board was abolished.

It appears, that George became a specialist in dockyard management. His role was one of recommendations. He allotted  individuals on committees responsibilities thus encouraging expertise. He divided the Victualling Office into manageable departments, making each head clerk sign the accounts and be responsible for any deficits. He also calculated the number of peacetime staff that were required to run and maintain the dockyards.

The first definitive date we have for George is 13 February 1826, when he married Hannah Carter. Her cousin, Montagu Pennington, curate of Deal’s St. George’s Church travelled to St. Mary Le Strand, London to officiate at the wedding.  It should be noted that the well- known ‘Bluestocking’ Elizabeth Carter, was the aunt of both Hannah and Montague. 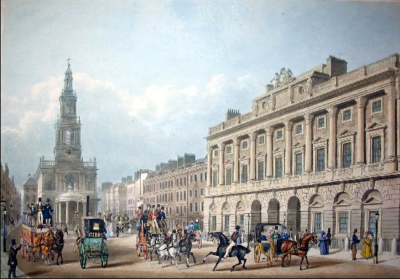 As a Naval Administrator, George was, at the time of his marriage, living in Somerset Place (Somerset House). However, we are not sure where the couple resided after their marriage. We do know that in 1830 George is responsible for, and listed as paying, rates on Park House in Deal’s Lower Street and, according to the census, he and Hannah are living there in June 1841 with Ann Carter, Hannah’s mother.

In 1833 Hannah writes a letter to the father of a young man named Henry Eden. Henry had been employed by Hannah and was with them in Deal but as they intended to go abroad she writes to say she is sending him home with his wages and a sovereign and that if he needed a character reference “ to write to the Rev. Montagu Pennington  Deal, he will satisfy any person of the boy’s good behaviour.” It seems she cared for the young man enough to ask for a letter to be sent by return post “saying he has safe arrived.”  Henry was later convicted of stealing a £10 note which he had found in the passageway of Colonel Lemon’s house, and had not returned. The trial was held at the Old Baily in October 1834 and he was sentenced to transportation and held on the Prison Hulk Euryalus, a hulk solely for young boys on the Medway at Chatham.  The letter from Hannah was included with letters of petition from those that knew him all attesting to his ‘good character’ including one signed by 23 members of Thame, plus a further letter with sixteen signatures. The authorities took note and Henry’s sentence was reduced to seven years penal servitude in England.

Where Hannah and George were going to when they went abroad we don’t know but they are again in Deal in 1839 when George is a Steward at a Ball that was being held at the Assembly Rooms. 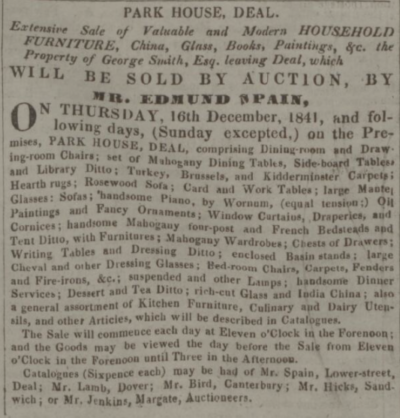 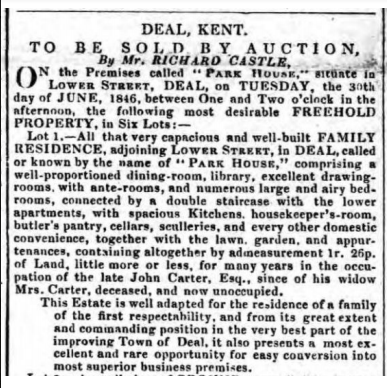 By December 1841 the couple are planning to permanently leave Deal and they put their household goods up for sale. The house itself was owned by Ann Smith, Hannah’s mother, who had inherited it from John, Hannah’s father. Following Ann’s death in 1844, in Malta, it was put up for sale and, not being sold, it was again up for sale in 1846 when it is still described as being of the Carter family. Finally in 1847 prior to its demolition “to form a new street”  the fixtures and fittings of the house, or Mansion as it is described, are all up for sale. It can be no coincidence that this new street was to be named Park Street.

By the time of the sale, George and Hannah were living in Malines, Belgium which is where George died on July 5, 1857, aged 80. In his short Will he leaves everything to Hannah and then if she were to die before him, to “Mary Jane Deppe the wife of Auguste Deppe Captain and now adjutant Major of the Belgian Military.” Mary Jane was Hannah’s niece the daughter of her sister Charlotte de Humboldt, nee Carter. It is probable George and Hannah moved to Belgium to be near Mary Jane whose mother, Charlotte, had died in Deal in 1847. 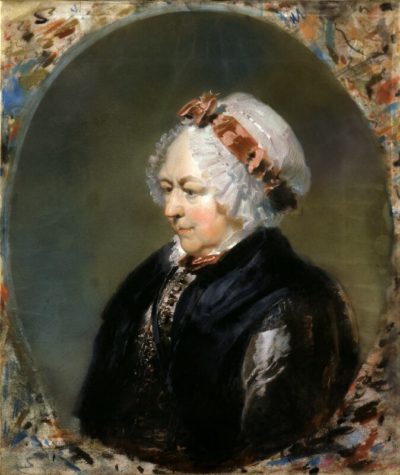 In 1854 Hannah donated “ six autographed letters” of her aunts to Deal Town Council. An ivory medallion copy of this painting, which was bequeathed to Hannah by Mrs Frances Bowdl[er] is in Deal Town Hall, set as a cover for the six letters.

In 1864 Hannah writes to the Illustrated London News about her aunt’s letters of whom she was obviously proud.

Hannah too was a letter writer and was one of the first to enter Paris after the fall of Napoleon. Her letters to her sister, Charlotte, were published as a book on her return in 1814 and titled Letters from a Lady to Her Sister, during a Tour to Paris.

The letters detail her journey from Deal to Bologne and on to Paris then, her return to Dover.

She writes her first letter from Paris on 29 April 1814 in which she tells Charlotte of her journey in an open boat that took twenty hours instead of the four or so expected but doesn’t complain about this recognising that it was in part the “ fault of we ladies, for we would not allow the mainsail to be set in consequence we lost the tide” On arrival she is surprised that they were able to continue with their journey as none of her party had Passports. It seems that being English, then, was enough to give them a clear passage. She tells her sister of the towns, the churches and the people who all, according to Hannah, were pleased to see them. As they travelled through the towns onto Paris, she tells what she sees of the devastation wrought by the war. Then four miles from Paris they travel a road “strewn with hundreds of horses heads, nay even some whole carcases remained.”

Once in Paris and settled in her hotel which she says unlike English Hotels, are just furnished lodgings, she visits the Tuileries, the Louvre and La Bibliotheque Royale describing all the wonders that she sees. 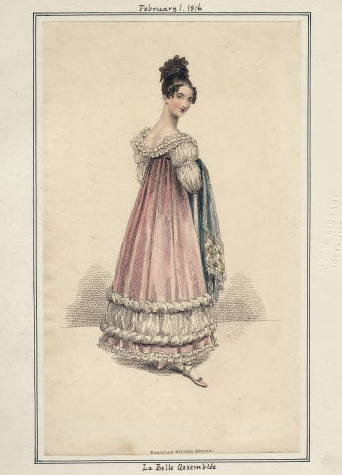 At the theatre instead of watching the play she ‘people watches’ fascinated by, but not approving of, the Parisian fashion of “very short petticoats with five or six flounces….” and the backs of the gowns “….leaves too much exposed to please my taste….” As for the “a la Greque” styled hair, she is very scathing saying “if they tried to disfigure themselves, these pretty women of Paris could not more effectually do so, than dressing in this outrageous manner.”

On 3 May 1814, she with her companions were fortunate to receive tickets to attend Notre Dame Cathedral where Louis XV111 celebrated his triumphal return to Paris. While awaiting the King, recognising that she and her friends were English she tells of how proud she felt as when the King entered many pressed forward and said “We owe all these blessings to you.”

She continues to record all the places she visits and the notable people she sees including the Duke of Wellington though sadly not General Blucher who she was disappointed in not seeing.

We know nothing of Hannah’s life from the time she arrived home in 1814 until her marriage in 1826.

The record of Hannah’s death in Malines in 1879, found on Ancestry, is unlike those for the UK. It is very informative. Translated it reads:

The 29th day of March 1879 Hannah Carter, died yesterday at 4 am, address Longmedas Cateaux (?), born in Deal, County of Kent, England, the 29th June 1788, living at Malines, the same house , widow of George Smith, deceased, daughter of  John Carter, deceased at Deal and Ann Powell deceased in Malta. Declared by Auguste Joseph Deppe, aged 26, Captain of Artillery, great- great-nephew of the deceased and by Charles Joseph Lambert Renson, owner of the property, aged 46, a neighbour of the deceased, both living at Malines.

Translated by and thanks to S. Harris

Sources and further reading:
Naval Power and British Culture, 1760–1850: Public Trust and Government Ideology By Roger Morriss
https://www.digitalpanopticon.org/Convict_Hulks
https://www.npg.org.uk/collections/search/portraitExtended/mw01124/Elizabeth-Carter
http://indiafamily.bl.uk/ui/home.aspx
FindmyPast England & Wales, Crime, Prisons & Punishment, 1770-1935
The Sixth Report of the Commissioners of Naval Enquiry  By Great Britain. Commissioners of Naval Enquiry printed 1804
Letters from a Lady (Miss Anne Carter.) to Her Sister, During a Tour to Paris, in the Months of April and May, 1814