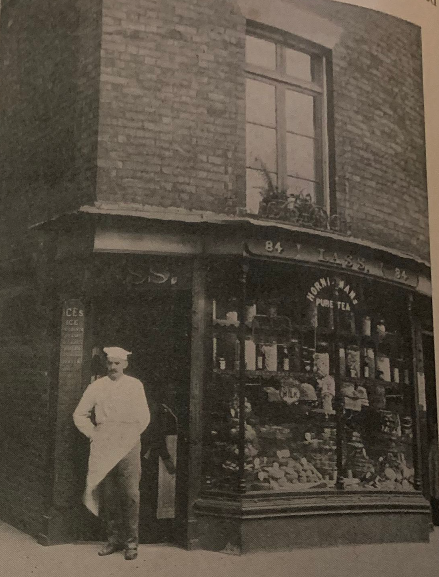 The above photograph is a familiar image studied by many local historians of Deal. It shows Frederick Lass posing in the doorway of his Bakery, Pastry and Confectionery shop in the High Street. In 1892 the town’s main streets were renumbered so we know that this photo was taken after that date. Prior to this Frederick’s shop was numbered 176 High Street and before the street itself was renamed, around twelve years earlier, it was 176 Lower Street.

For us this image is doubly interesting as if you can make your way to the High Street today and stand across the road to the needlecraft shop named Swanstitch, you can clearly see this was Lass’s bakery. The doorway is now a window but the shop is definitely recognisable. 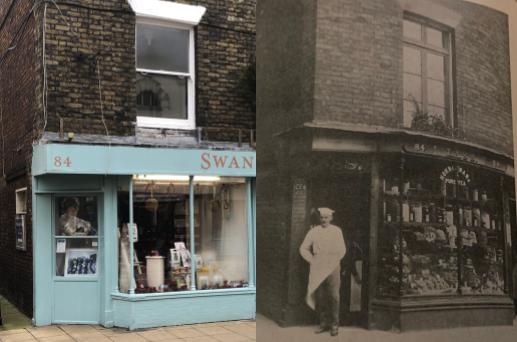 Today you can visit the establishment and purchase knitting wool and sewing requisites when it was owned by Frederick you could choose from home baked speciality breads, Pound Cakes, Savoy Cakes, Macaroons, Pies, and a wide range of confectionery. Frederick expanded the shop to create a tea room where ladies who were spending their morning shopping could rest for a while and gossip over a hot chocolate and delicious cake, much as so many of us do today.

So, who was Frederick Lass? 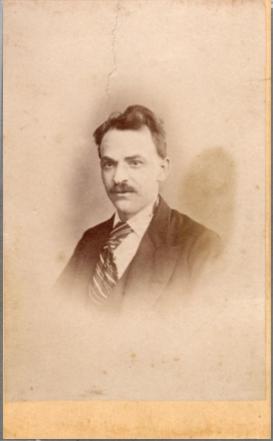 Research tells us that Frederick was born in June 1841 in Deal and that  it is likely he was born in his family home and Bakery on Beach Street. He was one of the twelve children born to William Lass Jnr and his wife Sarah nee Eastes.  Sadly they were to lose one of their daughters, Lorimier aged one, but the rest of the family grew up to be hard working, industrious and forward looking.

The bakery was originally established by Frederick’s father William Jnr. His father, William Snr, had been a school teacher, living in Robert Street, Deal. How, or why William alighted on a career as a Baker we are not sure. It is possible he became apprenticed to a baker and learned his trade on the job eventually setting up business on Beach Street. By 1851 William and Sarah had moved into 176, Lower Street that came with enough accommodation to house his large family. The 1851 census tells us that out of their eleven surviving children only two are being educated. Before the 1870 Education Act parents paid to have their children educated, mostly at small fee-paying private schools. As their grandfather was a well-established school master in the town it seems likely that he chose to educate two of the boys. Frederick was not one of them. Frederick was then nearly ten years old and the census records him as being ‘At Home’. He no doubt was helping in the bakery, learning his trade at the side of his father and his older brother, Francis. Francis went on to establish his own Bakery in Sandwich where he married and ran a successful business. 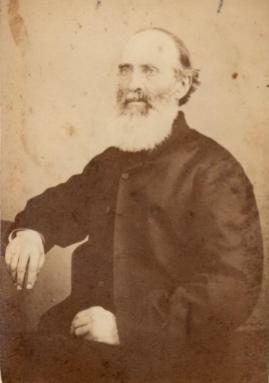 Looking at the 1861 census it is clear, at the age of 56, William Jnr is beginning to take a back seat leaving Frederick and his younger brother Benjamin to run the Bakery with himself contributing as a ‘pastry chef’. By 1871 Benjamin had left Deal, married and was running his own Bakery in Essex. Frederick continues to help to make the business grow and expand.

Having easy access to water is obviously a real necessity for bakers and we know, from an advert placed in the Kentish Gazette when the lease to Lass’s Bakery was put up for sale in 1867, that they had the right to the pump that was in their neighbours yard.

In 1878 William died and Frederick was left to take care of his ageing mother and his widowed sister Elizabeth and her three daughters. Elizabeth had married dairyman Henry C Spinner in 1857 but he died in 1865 leaving Elizabeth with three children, William, Ellen, Elizabeth under six and another on the way. So moving back home to live with Frederick and their mother was probably the only option available to her. 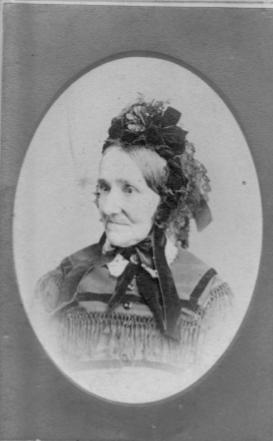 1886 must have been a sad year for Frederick as he loses both his mother and Elizabeth within a few weeks of each other. Elizabeth’s middle daughter, Elizabeth Lass Spinner, had married in 1884 but Ellen and the youngest  Fanny, both of whom worked in the bakery,  continued to live with Frederick and eventually they inherited the business.

In 1888 he was initiated into the Freemasons. The Wellington Lodge records show he gave his profession as a Confectioner and that his membership lasted for 22 years.

Frederick never married, why that should be we don’t know. Being a respectable and pleasant looking gentleman with a good living and trade it’s hard to imagine he wasn’t thought of as somewhat of a catch!

As the century comes to a close the business is obviously well established. By studying the shop window in the first photograph we are able to see how much Frederick had established the business. He and his two nieces are producing an array of bread, cakes, pastries, ices, biscuits, jellies and items of confectionery which may be purchased from the shop but they have also branched out into a catering service for Weddings, Balls, Private Parties and Routs. Lass’s was the place, in Deal,  to go to for your wedding cake.

The Aristocracy had their own private chefs who were able to turn their hands to confectionary, puddings and all manner of sweetmeats but by the1890’s both the Upper and middle Classes were wanting to emulate this tier of society and would turn to someone like Lass to produce the food required to impress their friends and acquaintances.

In the Deal Museum we found a pie dish that politely asks for it to be returned to F. Lass. Maybe this was part of their party catering business or used to provide ready made pies to theur customers. 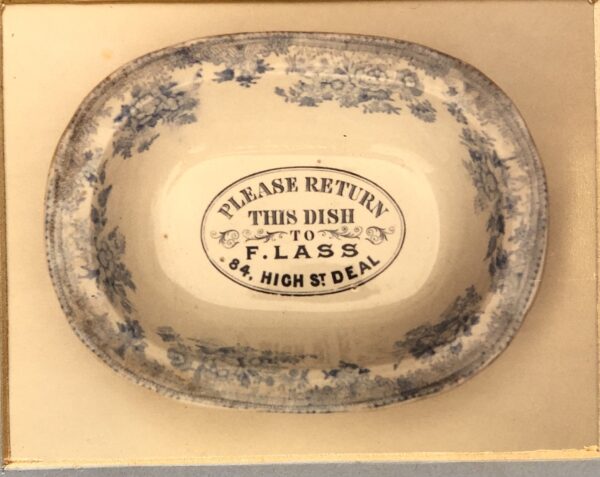 What of Fredericks Siblings?

Earlier we mentioned that Frederick had twelve siblings and we have already mentioned some of them but what of the others?

Mary married Theophilus Baldwin, in 1874, he was a Draper and Milliner; Loremiere was married in 1863, to Charles Colyer File. He was born in New Jersey but was living and working in  Macclesfield  as a Clerk to a Cotton Manufacturer; Grove was in the Merchant Navy. He started in the Mercantile Marines as a 1st mate and married Martha Ann. By 1861 when they were married by which time he had qualified as a Master in the Merchant Navy. Then there was Sarah who married a tailor, William Ekins, and shortly after their nuptials in 1855, they emigrated to Galesburg, Knox County, Illinois. USA. As did Sarah’s brother, also named William. Both William Lass and his brother in law William Ekins fought in the American Civil War (1861-1865).

Obviously they must have written home about how wonderful their lives were as two years later in 1857 Sarah’s brother William joins them followed soon after by Ebenezer, John and Thomas and then in 1877 their nephew William Spinner. The final family member to arrive in Galesburg was William Spinner’s niece Elizabeth Lass Miller and her husband Charles Miller. America is good to all of them, they marry, have families and die there.

We can only find evidence of one of them returning home for a visit. At the age of 79 years John returns to visit someone at 39 Beaconsfield Road. Deal. Why? We have no idea.

Frederick died in Deal in 1902 bequeathing the shop to Ellen and Fanny. When Ellen died in 1923 still a spinster, she willed half of the business to her sister Fanny who eventually sold the bakery and retired to Ramsgate where she died on 30th December 1949 aged 83.

William and Sarah and Grove are all buried together in Hamilton Road Cemetery, beside them are Frederick, his sister Elizabeth and her daughter’s Ellen and Fanny. Their headstone reads

In loving memory of Frederick Lass who died
November 23rd, 1902 aged, 61 years.
Also Elizabeth Ann Spinner, sister of the above who died
April 3rd 1886, aged 56
“Until the day breaks and the shadows flee away”
Also Ellen Sarah Spinner, eldest daughter of the above, who died
March 25th, 1923, aged 62 years
“Thy will be Done”
Also youngest daughter, Fanny Mary Spinner, who died
December 30th, 1949, aged 83 years.

a large evening party or assembly