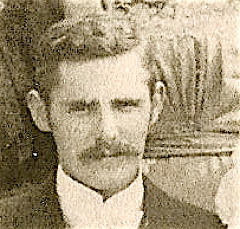 Appearing in The East Kent Mercury on 15 May 1940,  under the heading of ‘A Dealite’s Reminiscences- Childhood Memories and Shipwrecks,’ was  the first of our ‘memories. It was written by Mr. H. C. D. Collyer, a former teacher and resident of Deal who had emigrated to South Australia in 1910. He had kept in touch with the town of his birth through his family and by the fact that a sister had weekly, for over thirty years, sent him the East Kent Mercury. 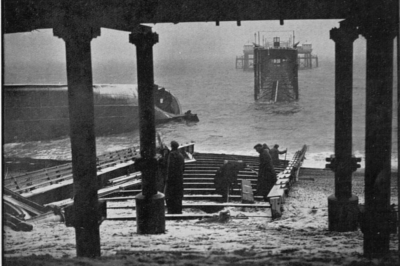 In early  1940 the newspaper had printed articles about the Pier. One story was about  the wreck of The Nora following its collision with Deal Pier on January 29 1940. It was this that prompted Mr. Collyer to put in writing his ‘memories’
He tells of how as a child he would stand on a horizontal rail under the pier this, he says,  “…was the king of the castle position…sought eagerly especially at high spring tide when big waves came curling and tumbling up and over …” From here he also used to watch the regatta day boat contests.

At the top of Oak Street he remembers “…the old pier junk…” that laid rusting upon the parade where he and his friends played and dared each other to perform dangerous tricks. Adults tried to curtail the more dangerous activities of these youngsters with the tales of a child, who had  attempted to crawl through a cast iron cylinder pile, who had got stuck and was nearly dead when finally rescued.

Blondin, the well- known tight-rope walker of the time, was emulated by Herbert by walking on the narrow edge of a long girder. Unfortunately, one day, this ended in disaster when he fell and gashed his eyebrow and, he says, he was then taken screaming to the nearby chemist shop to have it stitched. This was at the chemist shop of Mr. John Clarabut whose nephew Herbert later ran his Drapers business in the town.  Clarabut’s chemist later became Dunn’s Chemist and you can still see the ‘ghost sign’ painted high on the wall above the shop. 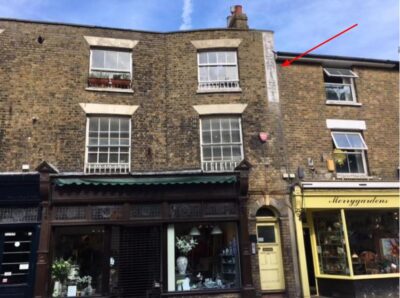 The Beach House he remembers had a flint built wall which he used to climb on to peer at the purple grapes growing in the glass houses there. These fruits, once only looked upon were, in 1940, grown in “heaps” at Herbert’s home in Brighton, South Australia. 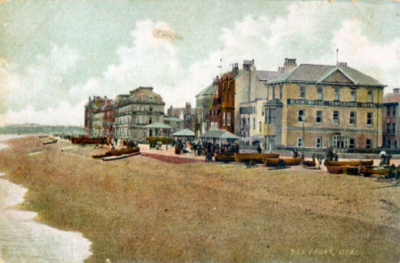 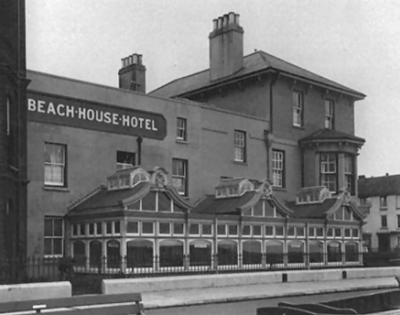 Of the several grocers and fruiterers in the town he remembers Nobles on the corner of Wellington Road and High Street where he would “eye” the many foreign fruits sold there. Behind Nobles, that was actually built in the front garden of Prospect House once home of Thomas Hayward, was the Hayward’s Boatbuilders yard where he used to watch the owner “doing carpentry”. In the yard he says “cheap acks” would set up stalls and sell their wares. Acrobats would also apparently perform here too. Perhaps they were from one of the circuses that visited the town?

Before enrolling in the Wesleyan School in Union Street Herbert says that he was introduced to “…education by being “…put in the charge of an old dame…” where he was “…set to make strokes and pot hooks with a scratchy pencil on slate…”  He also said while making these marks the ‘dame’ would be warming her morning beer on the hob and later “..partook in  biscuit and cheese…”  and if Herbert had behaved himself he was given a coin and told to visit Woodcocks the baker’s shop to buy a ‘farden sugar button’. Woodcock’s  baker and confectioner’s shop was right on the corner of Farrier and Middle Street.

But who was Herbert Charles Duncan Collyer? Well he was born  in Deal in 1872 the tenth of the twelve children of George and Adelaide Collyer. We don’t have a baptism date for him but, from his descendants, we know he was born on April 6 1872 and from the census we know that the family were then living at 31 Duke Street.

His father, George Wright Collyer, was a builder by trade and in the employ of George Cottew. Herbert remembers the small brass plate on the Cottew’s front door in Farrier Street  that simply said G.B.C. the initials of George Bayley Cottew. The Cottew’s yard was then in New Street where, even now, a much weather beaten sign can be seen.

Returning to Herbert’s memories, on one Sunday afternoon, once he had polished his father’s boots and had his lunch, he ventured from home to walk the three miles to Kingsdown Beach. This was, he says, in 1879 when he was aged just seven. Can you imagine letting a seven year old do this today? On his way he passed by Deal Castle and Ralph’s Coal-yard with its tar-coated walls. At this time coal arrived in Deal by Collier Ships that beached on the shore and then the coal was ‘hauled’ by men up the shingle then transported by horse and cart to the various yards in the town. The artist J. L. Roget captured the scene in water colours in which he depicts the coal being unloaded  on the beach and being hauled up to Ralph’s yard which can be clearly seen in yet another painting he completed  in 1874. 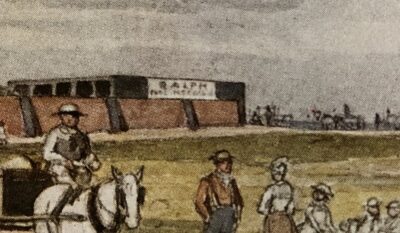 Taken from a painting dated 1874 by JL Roget.

Once past Walmer Castle he neared Kingsdown beach where he saw the huge iron hulled vessel  “…rolling in the waves, but held at the bow by a long steel wire cable fastened to a stake driven well down in the back beach…” Now Herbert  can’t remember the name of this vessel but, he was told by a man on the beach that the ship was carrying pianos and other cargo to Australia and this left a lasting impression on him. Little did he know then that Australia would, years later, become his home. After his long weary walk home he returned bedraggled and was taken to task for his appearance.

Then about five years later on Sunday 27 January 1884  young Herbert and his friends, rather hurriedly, left Church to see the ‘Alliance’ which had smashed into the pier,  coming to rest near the South, or as he described it the ‘big’,  Parade near Fox’s Bakery which was a few doors down from the Boatmen’s Reading Rooms.

The Sandhills beyond Sandown Castle were a particular favourite ‘rendezvous’ in the summer months for Herbert and his friends. In the winter they stayed on the Parades that were, as he remembers them,  often frosty or covered in snow. A watchful eye was kept out for the local ‘bobbie’ as boys with boisterous spirits trying to keep warm were frowned upon.

Today we take it for granted that we can get on a train, several times a day, and travel from Deal to Dover and return again. Herbert though remembers the building of this railway when he and his friends would travel up to Waterworks Hill, now St. Richard’s Road, to watch the steam shovel “…gnawing  a way through the chalk hillside for the purpose of completing the Dover and Deal Railway…” 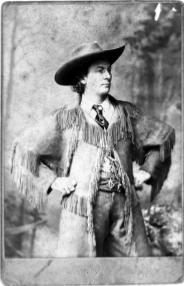 A well known ‘quack doctor’ Sequoyah visited Deal setting up his show in South Street. Now despite dressing like buffalo bill and his claims that his recipes were of traditional Native American origin he was in fact a Yorkshireman called William Henry Hartley. In most towns he pitched up with his painted wagon and assistants dressed as cowboys and Indians. He drew in and entertained the crowd with his brass band and  a Wild West-style show.

Such was the success of his shows and the demand for his products – Sequah’s Prairie Flower and Sequah’s Oil – he had to recruit more ‘Sequahs’. By late 1890 there were 23 of them, and Sequah grew to be a big-business brand name.

Part of the show was to perform tooth extractions. We don’t know which ‘Sequah’ actually appeared in South Street, original or not, but Herbert remembers well how Sequah “..made a lightening job…” of  extracting an aching tooth of his.

By 1891 Herbert was a Pupil Teacher at the Union Road Wesleyan School. Teaching was to become his vocation and after attending and qualifying at  Westminster College he took up the post, in 1895, of Headmaster at the Wesleyan Boys School in Gauteng, Pretoria, South Africa. 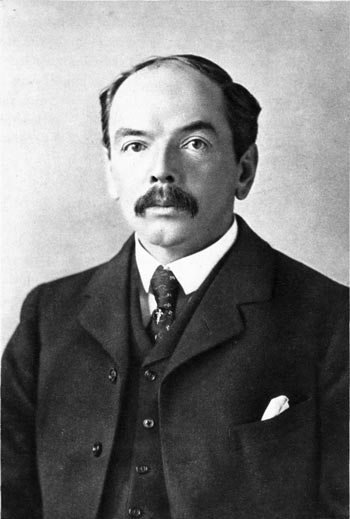 He was in Pretoria, in 1896, when Dr. Jameson, of the ‘Jameson Raid’, was brought into court by the Boers. The ‘Jameson Raid’ was intended to trigger an uprising by British expatriate workers in the Transvaal; it instead contributed to the causes that eventually led to the second Boer War.
A dispute between the Transvaal and Cape Colony governments arose when the Cape Colony refused to pay the high rates charged by the Transvaal government for the use of the Transvaal controlled section of the railway to Johannesburg. Eventually, the dispute was settled, but relations were severely strained so amongst others Cecil Rhodes of the British South Africa Company planned an uprising with expatriates in Johannesburg seizing the Boer armoury in Pretoria. Jameson and his force would dash across the border to Johannesburg to “restore order.” With Johannesburg under their control, they would have had control of the gold fields.
The British South Africa Company troops, led by Leander Starr Jameson, raided the Transvaal, but there was no uprising to support them and Jameson and his men were captured by the Boers. This embarrassed the British government and led to the replacement of Cecil Rhodes as premier of the Cape Colony and the determination of the Boers, to control the Transvaal and its gold mines. 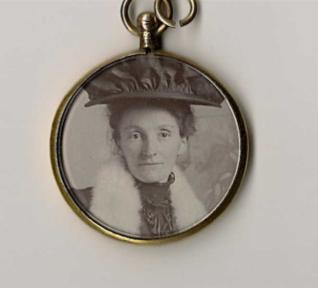 Herbert returned to Deal in April 1899 and in May he married Mary Florence Quance Key.  Soon after their marriage they moved to the Isle of Wight where they were Headmaster and Headmistress of Niton School. They stayed there until ,in 1909, they emigrated to Adelaide, South Australia. Sadly Florence, as she was known, died onboard on the 25 January 1910. Herbert arrived, bereft, in  Adelaide with his eight year old son. They settled in Brighton, South Australia where Herbert was to remarry in 1916 to Selma Clausen. It was from here that he wrote to the East Kent Mercury to tell them of his ‘memories’.  In Brighton, Australia, he was described as a “…scholarly man…” who, throughout his life, corresponded with family and friends all over the world including to his sister here in Deal.

Herbert died in a road accident in 1955 whilst riding his bike, he was then aged eighty two years old. 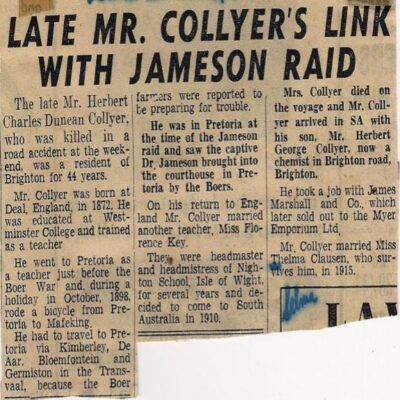 Sources and further reading:
Article written by HCD Collyer and printed in the East Kent Mercury on 15 May 1940
www.catalog.slsa.sa.gov.au
With thanks to Gillian Malcolm for images of Herbert Charles Duncan Collyer,  Mary Florence Quance Key and Herbert’s obituary
London Illustrated News
With thanks to ©Illustrated London News Ltd/Mary Evans Picture Library
Newspaper image © The British Library Board. All rights reserved
With thanks to The British Newspaper Archive (www.britishnewspaperarchive.co.uk)
https://thequackdoctor.com/
The Wellcome Library