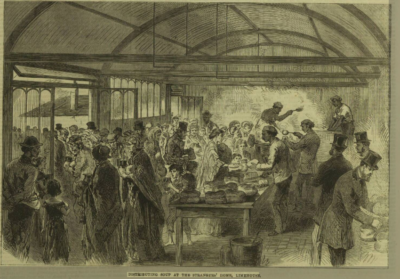 During the mid-1800s there was a growth in Soup Kitchens throughout the country. They were organised and run by charities, churches or local wealthy benefactors and they provided the ‘needy poor’ with a hot meal once or twice a week. Most often this was through the winter months when bad weather reduced or even prevented work which, for those already living in poverty, meant that they would find it even harder to feed themselves and their families.

The first entry, in the minute book, is dated Monday, 22 December 1851 and was made by James Reaks, son of the Mayor, Thomas Reaks. James writes that a public meeting was convened by the Mayor and held at the Town Hall to discuss the possibility of   “…establishing a Soup Kitchen for the Relief of the Poor during the winter months.” Incidentally Stephen Pritchard, in his History of Deal, attributes the early success of this Soup Kitchen to these two men highlighting their “constant and untiring zeal.”

At this first meeting, the Mayor announced that it was “desirable to start a soup distribution.” This was unanimously agreed, and a General Committee was formed.

The collection of funds, the appointment of cooks and committee members, the supply of foodstuffs and the method of distributing the soup are all recorded in this wonderful piece of social history. 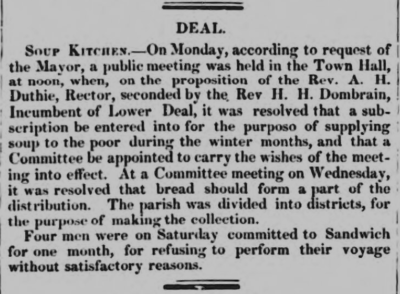 The committee and it should be said they were all men, met again on Wednesday 24 December when a subscription, by which they mean a donation or contribution, was decided to be “immediately entered into for the relief of the Poor” and that the relief should consist of soup and bread.

They divided the town up, and committee members were allocated areas that they were to canvas and make collections from. This happened on the Friday and Saturday before the next meeting on Monday 29th, by which time £109 12s 10d had been collected and was duly handed over to the treasurer, George Huges Esq. J.P. 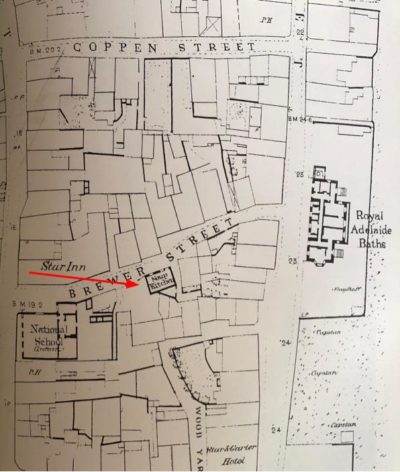 A discussion followed as to where the Soup Kitchen should be held. Mr. Nethersoles Stable and Mr. Cooks Forge were spoken of, but these were deemed unsuitable. They did, however, decide on the purchase of 80-gallon iron boilers in which to make the soup.

Despite their best efforts, no suitable building could be found and so that idea was abandoned. It was agreed, though,  “that it was desirable to work to the mode of distribution as used in the winter of 1849-50” and that a quart of soup was to be given and to offer a quarten loaf at a 1d.

The lack of a building was partly solved by local solicitor and committee member, James Barber Edwards, Esq., who generously donated a  “piece of land for the purpose of erecting a Soup Kitchen.” This was in Brewer Street as can be seen on this 1872 map.
A building fund had already been established but more money was now urgently required to enable the speedy erection of the Soup Kitchen. So a letter was sent addressed to Lord Charles Paget, Major Boys, John Plumtre MP, informing them of the progress already made and asking for any contributions that they may care to make, was sent. Although they still had no permanent building, relief was desperately needed and on Saturday, 3rd January 1852, the Committee announced in the ’Dover Telegraph and Cinque Ports General Advertiser’ (there were no Deal town newspapers at this time) that a Soup Kitchen was about to be established. Notices would have been placed around the town, and announced in the church by ministers, most of whom were also committee members, advising that registration of the families in need was to take place on Monday 5th. 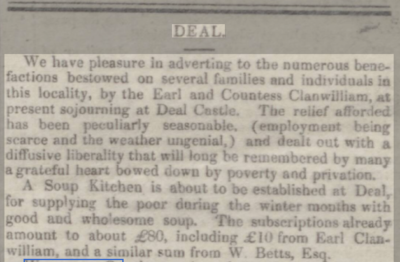 The minute book tells us that a Hall, probably the Guildhall, was arranged with tables and that registers were prepared. A description of how this registration was made in the minute book.

Each Gentleman has papers of one or two initials, those same initials are pinned on the wall over him, The Poor proceed to their own initials, the entry
Is thus made-

How many altogether in family counting husband and wife

Space for the award

After the registration is made the party is to be furnished with a piece of paper this A1 or A2……. these are necessary for the giving out of the right tickets as on the occasion of 12 to 1 O’clock on Monday, 12th January.

The committee members who were to supervise the distribution of the soup, on the Tuesdays and Fridays of each week were all listed these included The Reverends Benson, Dombrain, Rathbone and Cray, Alderman Hughes, Mayor Thomas Reaks, Mr. Clarabut, Mr. Stubbersfield and Mr. Pritchard.

The soup ingredients were given as –

They now needed a cook. “A Bill”, in other words, a poster, was made which resulted in thirteen people applying for the post. Then, following a ballot, William Brown of 5 Market Street was voted in as cook for which he was to receive 5s per distribution day. Zachariah Nicholls was elected as his “servant” with 2s 6d per distribution day.

On Saturday, 24 January, another announcement was proudly placed in the newspaper saying that 160 gallons of good beef soup had been distributed. Twice-weekly soup distribution continued until April 2nd but the “inclement weather” continued and a few weeks later, on April 23, a deputation called upon the Mayor to reinstate the Soup Kitchen. So, the next day the poor were again invited to the hall for their tickets. And collections at each place of worship in the town were called for.

Commencement of the 2nd Season was on Tuesday, October 12th, 1852, and the minute book shows that a similar pattern of committee elections, fundraising, allocating tickets to the poor, and the making and distribution of the soup and bread all continued in a similar fashion.

Tenders and samples of peas are recorded indicating an effort to offer a soup of a good standard while keeping costs down.

In 1859 Parents were reminded that they had to appear in person to register. The copy of the notice that must have been posted around the town read

The Committee requests The Poor to attend at the Guildhall on Thursday next Jan. 13th
Between the hours of 10 A. M. and 1 P. M. To have their names Registered.

Parents sending their children will not be supplied with Tickets.

By 1873 it appears that the soup was being charged for at a 1d per quart, bread wasn’t mentioned in this year. Then in 1891  “…. as nearly all the original trustees of the Deal Soup Kitchen are dead and the only known survivor, James Barber Edwards, being desirous of transferring his trust to the Mayor, Alderman and Burgesses of Deal” “A Public Meeting of Subscribers of the Deal Soup Kitchen”  was held at the Town Hall. This was, we are told, unanimously resolved and the council took on the responsibility for feeding the poor in times of need and continued to use the ‘Soup Kitchen Minute Book.’

The last entries, in the book, were made at the beginning of 1914, by Mayor Charles Hussey. Advertising in the  “…two local papers in respect of tenders of Meat and Peas…” brought tenders from two butchers and four grocers. They accepted the tenders from the butcher, Mr John Gravener Woodruff, for his English Beef at 2s 11 1/2d per 8 lbs and also Ox feet at 11d per set and the pea tender from the grocer, Mr Charles Weston, for his peas at 26s per sack.
It appears too that they were still having to remind parents that they had to attend on registration days to receive their tickets and it was “arranged that notices be given to the children now in attendance that the parents must attend on Monday morning next ay 10.30” with the  “…first distribution of soup fixed for Saturday 24th 1914.”
This was to be the last time the soup kitchen was opened. The war, horrendous though it was, brought some financial and food security. The very fact that husbands and sons were away from home meant that food was able to go further. Especially later on in the war when food became scarce.

Then in March 1918, a letter was sent to Deal Town Council suggesting that, as food had become so scarce, the soup kitchen should again be opened.  The difficulties in setting up and running the Soup Kitchen in war-time Deal was discussed but due to those difficulties, no action was taken. 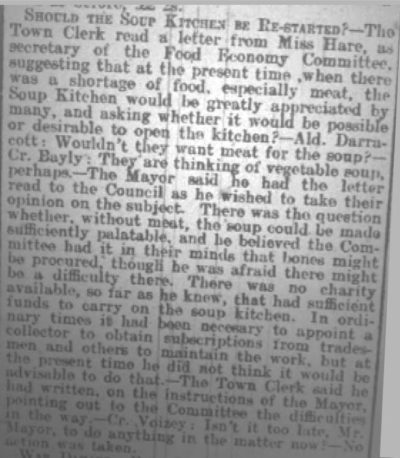 is a quarter of a gallon or two pints.