Thomas Longley Mourilyan was born in 1840 and named after his father who was an Ironmonger and Brazier who had married Mary Mumbray in 1836. In 1841  Thomas senior appears on the census in Fleet Lane, West London but what he was doing there we have no idea. His wife is in Deal with their young family, listed as a Brazier on Broad Street, right next door to the Halford family.
Sadly Mary died in June 1847 followed by her husband in May 1851.
Thomas junior by the time of his father’s death was living with his grandfather at 88 Lower Street. His retired Naval Officer Uncle Edward was there too. Maybe it was with his encouragement that Thomas joined the service.

Thomas’ Naval records not only tell us the ships on which he served but gives a brief description of him when he entered the service and joined HMS Nankin as a Boy 2nd Class on 24 November 1854. 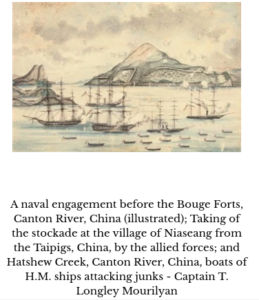 HMS Nankin took part in the Second China War 1857-60 and it was during this time that Thomas painted a small watercolour of a naval engagement. 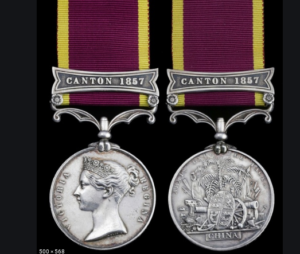 Example of the China medal won by Thomas L Mourilyan

Thomas gained the China Medal for his service during this campaign.
By 1866 Thomas had been promoted to Lieutenant and had become a more than capable Navigator.

In 1870 on the South Coast of Britain, there was a violent storm that lasted several days. Ships anchored in the Downs suffered from dragging of anchors and the loss of them. The Boatmen of Deal, Walmer & Kingsdown threw lines aboard the vessels and helped the crew and passengers to safety. The Racine, a schooner eventually beached after losing three anchors and chains, just past Walmer Castle. At this point, Captain Douglas rushed into the sea three times trying to get lines to the desperate crew. Others joined him and those that were rescued were taken in by local people.
The scene of the storm and the rescues were captured by Thomas in his painting ‘A Terrible Shipwreck: 12th February 1870 at Kingsdown near Deal’ We can only assume that Thomas had left the HMS Medusa in March 1869 and had not joined HMS Basilisk until May 1870 so it is quite possible that Thomas was a witness if not a participant to these rescues. 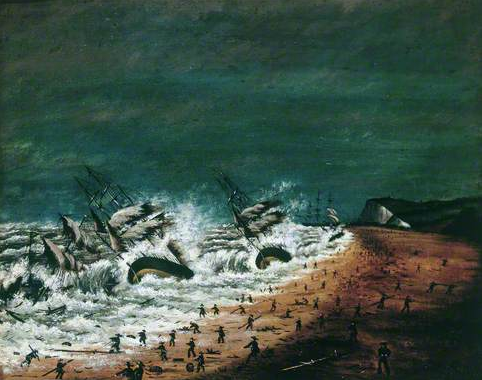 ‘A Terrible Shipwreck: 12th February 1870 at Kingsdown near Deal’ by Thomas Longley Mourilyan In the Compton Verney Collection

It was while serving as Navigating Lieutenant on HMS Basilisk under Captain John Moresby that he charted a harbour on a river, south-east of Cairns, Australia. Captain Moresby decided to name the river after himself and the harbour after Thomas. 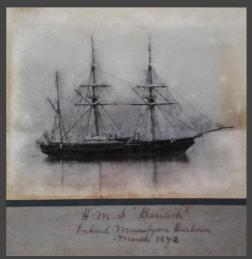 In 1869 Thomas married Elizabeth Irvine in St. Andrew’s Church, Deal. Their son and only child Charles Thomas was born in August 1870 in Sheerness but they returned home to Deal to have him baptised in St. Andrews in September. The following year Thomas was to sail on HMS Basilisk to the  Australia Station.

While he was at sea Elizabeth and their son stayed with her mother in Napier Terrace, West Street. It was here in April 1873 that Elizabeth died aged just twenty-eight.

The Basilisk returned home to England in 1874. It appears that he did not return to sea again until 1878 but in 1876 he married Augusta Pain. By 1881 he was promoted to Staff Commander. He retired in 1888 returning to not to Deal but to Canterbury where he and Augusta remained until their deaths.

Charles Thomas after finishing at University joined the Clergy becoming a Reverend in the Church of England with a parish in Eccles where he married Lucy Delicia Barton, in 1913. It appears that at some point after retirement that he too returned to Canterbury where he died in 1957.

a person who made or repaired household items made from brass

The Australia Station was the British, and later Australian, naval command responsible for the waters around the Australian continent.