Thomas Parker, like his father before him, was a butcher, possibly starting off by working with and for his father, David, at 43 Lower Street. After his marriage to Mary Ann Ralph in 1846, he moved to his own premises on Lower Street first to 205 then later moving almost opposite, to number 3,  where he remained until around 1870 when he took over the license for the Deal Cutter on Beach Street.

Sadly, his fourth son, George Spinner Parker died here in November 1870, then six years later in June 1876 he too died. 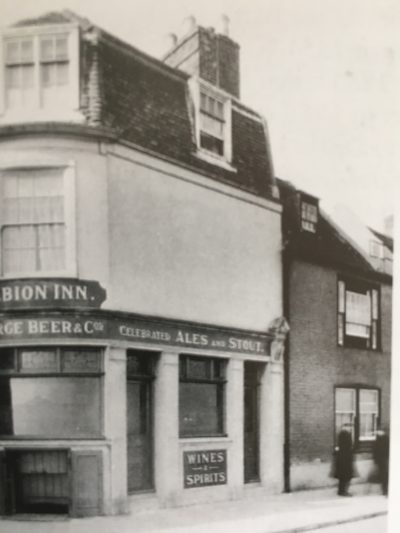 Mary Ann and Their Children

His widow, Mary Ann then moves to Mile End Old Town, Middlesex, with her two youngest children Alfred and Annie. With them, in 1881, is Annie M. A. Parker who was apparently born in Hong Kong in 1871 and the daughter of one of her older sons, though which one we don’t know.

The 1891 and 1901 census tells us that Mary Ann is living with her eldest son, Thomas David Cox Parker, in Hornsey, Middlesex. Mary Ann is living on her ‘own means’ so her husband must have left her reasonably well provided for. Annie, her daughter, is still with her and in 1891 says she is a retired governess. Thomas D.C.  seems to have been good with figures as in 1891 he says he was an accountant he then later becomes a Secretary to a Public Company.

Mary Ann died sometime after 1901 but with a popular name such as she had we can not tell for certain when. In 1911 we find Thomas D. C.  is living in East Ham with his brother John and his wife Kate.  Annie was in the Middlesex Hospital at this time but after that, there is no definite trace of her. As for Annie M.A. Parker, Mary Ann’s Granddaughter, she dies in the Edmonton area in 1896.