Edward Thurrel Tapley was born in Crown Court which is just off Middle Street. He was the tenth of the eleven children born to James Tapley and Ann Wilkins. Edward, like his elder brother John and younger brother Thomas, was to follow his father and make his living from the sea.
In 1832 he appears with James and John in the lists of Deal Boatmen in the ‘Select Committees Report into Pilotage’.

This was a time of great hardship for the people of Deal, particularly the boatmen, so it no surprise that people then looked for employment elsewhere or that the young boatmen would have joined the navy when the opportunity arose and this included Edward who in 1834 has joined the Navy and was serving on His Majesty’s  Sloop, Raleigh.
Maybe the naval life didn’t suit him as he only served for 9 months, however, during that time he ‘allotted’ 14 shillings of his wages to be collected by his mother from the Customs House on Lower Street. She would have entered and left via the door on the left as seen in the image below. 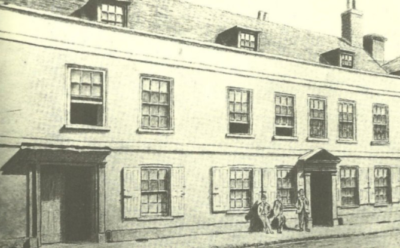 On the 9th May 1841, Edward married Sarah Ann Curling at St. Leonard’s Church. When they married Sarah was already expecting their first child who was born in Gravel Walk, now Anchor Lane, at the home of Sarah’s parents in July.

The census that year was taken on the 6 June and Sarah appears on it with her parents and Edward with his. Maybe they were just visiting or I think it is more likely that there just wasn’t anywhere else for them to live as a couple at that time, who knows?

On the 12th February 1845, Edward was registered, or ‘ticketed’, as a Merchant Seaman. This register gives basic descriptions of the men and tells us that Edward was 5 foot 6 1/2 inches with a fresh complexion, dark hair and grey eyes.

The seaman’s ticket system was introduced in 1845 and enabled a seaman to carry with him a note of his service and character. The system was replaced by the Third Register of Seamen in 1854. 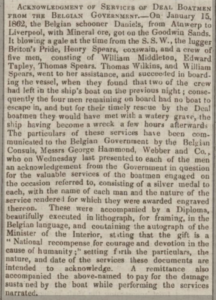 Edward was part of the crew of the Britons Pride who took part in the rescue of the Belgian Schooner ‘Daniel’ whose crew had abandoned it during a gale leaving four men on board without means of escape. Two years later in 1862, they were awarded ‘Medals for Courageous Acts’ by the Belgian government.

Edward like most of the boatmen took part in Deal’s Annual Regatta. I found him in the local newspapers, mainly in the 1860s as a crew member taking part in races sailing on the ‘Dart’ and on several occasions winning prize money.

The Sandwich Borough (which included Deal) by-election of 1880 results was contested and an inquiry was ordered to “inquire into the existence of corrupt practices”. Bribes and treating had taken place on both sides. Some of the men of Jews Harp Alley as well as being paid, amongst other things, to make and hang flags and had taken bribes for their votes.

Edward, probably because he had received a ‘certificate of immunity’, admitted he was one of the forty-two listed as ‘Bribers’ who were paid to ‘bribe’ men for their votes. He gave a short piece of evidence on the 15 October at the hearings held in Town Hall. It was estimated that 900 people took a bribe.

Where do you live?- Jews Harp Alley
What is your occupation? — A Boatman
What did you get at the election?– £3 13s
You are one of the forty-two? — Yes
Did you get anything else?- I had something like 20s or 30s for putting up flags
Anything more? — Nothing more

As a result of the report, Sandwich was abolished as a constituency and several men from Deal were imprisoned, including James Barber Edwards. James Barber Edwards held the lease to 3 Jews Harp Alley, Edward’s home leading me to think that he may have been coerced into his role especially as soon after he moves to The Mariners Reading Rooms on Beach Street where he remained until his death in 1893.

Hannah marries twice her first husband William T Moss died when the pilot vessel Pride of The Sea was wrecked in a gale off Shanklin. He and the rest of the crew are buried in Shanklin cemetery. Sarah Wilkins also married twice first to Lance Corporal David Cuell and then to Samuel Hyams. I only know about Samuel as in David’s will it says Sarah is now the ‘wife of Samuel Hyams’. Neither Sarah or Hannah appear to have had any children Amelia though had thirteen. She married George Forsdick a Sergeant Musketry Instructor. She travelled with him and their growing family around the country and then to Malta and Halifax Nova Scotia before returning to run a pub with her husband in Landport. After his death in 1910, she moved to live with her daughter Florence and her husband James Bell, in Leicester, who by that time had also retired from the army. Amelia died there in 1919.