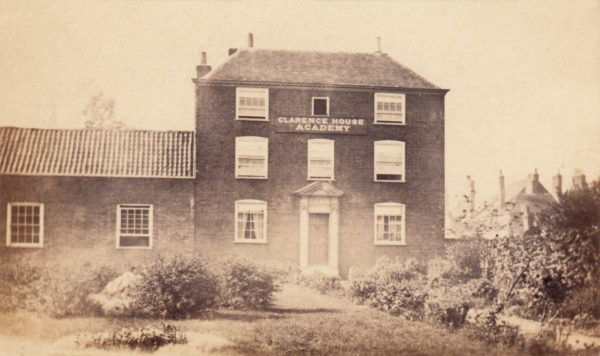 Clarence House was a late 18th or early 19th century building that once stood in its own grounds on a plot between Duke Street and Water Street.
In around 1830 it was owned by schoolmaster Thomas Reaks who ran it as a Boarding School for Boys. It was then known as ‘Clarence House Academy.’

John Vincent purchased the property when it came up for sale in 1834 and he continued to run it as ‘Clarence House Academy’  until his death in 1851.

Joseph Wallis eventually took over the school and ran it until around 1890 when he retired.

The 1891 census lists the house, numbered as 50 High Street, as ‘uninhabited’ but by 1892, when the town’s street renumbering took place, it had become the family home of William H R Thompson whose China and Glass store was on the corner of Griffin Street: known as the ‘Dustpan Store’  because of the large ‘dustpan’ like structure on its roof advertising the store.

Kelly’s directory of  1922 lists Clarence House, now 183 High Street, as the home of the Whitlock family. They made use of the grounds around the house turning them into a market garden, with glass-houses and other out-buildings. They sold the produce that they grew from their front garden and later in a purpose built shop built in the front and to the right of the garden itself. The BT Telephone Directories for 1961,  show a RG Whitlock as a Fruiterer and Grocer still living at 183 High Street, with the telephone number of Deal 242. 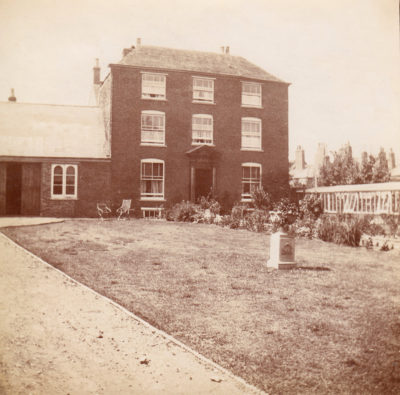 “…Alterations and additions were made to the property, and a single storey extension was added on one side. On the visit of the Minister’s Chief Investigator, it was found that the property had movement in the front upper part of the house, internal walls had damp and timber rot and the cellars had flooded. The decision was made not to place a preservation order on the property…”

Permission was therefore granted to demolish the house as part of a plan for road widening and housing. Today modern houses with the widened High Street to their front covers the entire site of what was once Clarence House and it’s gardens.

Sources and further reading:
Images of Clarence House with permission and thanks to Jenny Cosgrove
Newspaper image © The British Library Board. All rights reserved.
With thanks to The British Newspaper Archive (www.britishnewspaperarchive.co.uk)
http://www.eastkent.freeuk.com/deal/clarence.htm
Street re-numbering- Deal Maritime & Local History Museum
BT Telephone Directories on Ancestry.co.uk